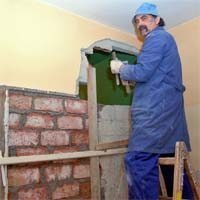 Tremolite asbestos is a non-commercial form of amphibole mineral found in some chrysotile, talc and vermiculite deposits.  Like all forms of asbestos, it carries the risk of asbestosis, lung cancer and malignant mesothelioma.  Although people who live or work around asbestos mines or work directly with asbestos-containing products are at greatest risk, tremolite may also pose a mesothelioma risk to consumers.

A recent study by a California firm called ChemRisk is warning that hundreds of consumer products contain mesothelioma-causing tremolite.  To get an idea just how great the mesothelioma risk is, the group looked at the exposure-response relationship in two high-asbestos environments – the Thetford chrysotile mine in Canada and the vermiculite mine in Libby, Montana.  For people working in these environments, the lowest-observed-adverse-effect level (LOAEL) for mesothelioma was 35-73 fibers per cubic centimeter (f/cc) per year.

Using estimated airborne tremolite asbestos concentrations for simulated and actual product use, ChemRisk researchers then made estimates about the levels of exposure in other environments.

Career auto mechanics who can be exposed to asbestos-containing products in brakes, transmissions, and engine parts, have an estimated exposure level of 0.028 f/cc per year.  Consumers who regularly used vermiculite-containing gardening products (such as potting soil) are likely exposed to 0.034 f/cc of tremolite per year.  Non-occupational use of joint compound carries an estimated exposure level of 0.0006 f/cc per year, while homeowner removal of Zonolite insulation likely exposes homeowners to 0.0002 f/cc of tremolite each year.   All of these professions and activities have various rates of mesothelioma and other asbestos related diseases.

Although the numbers are small compared to the mesothelioma risk of asbestos miners, the study’s authors warn that their analysis examined only a few of the hundreds of chrysotile and talc-containing consumer products on the market.  The more of these products a consumer uses on a regular basis, the higher the exposure to tremolite and the greater the overall lifetime risk of health problems such as  mesothelioma.

Every year in the U.S., 2,500 to 3,000 people are diagnosed with mesothelioma, a cancer of the mesothelial lining. Because of its long latency period, many mesothelioma victims were exposed to asbestos decades ago.

Finley, BL, “Evaluation of tremolite asbestos exposures associated with the use of commercial products”, December 5, 2011, Critical Reviews in Toxicology, Epub head of print.

An international group of researchers have provided recommendations for countries to create a mesothelioma registry. Mesothelioma registries are great tools to monitor the negative effects of asbestos. It can help to identify clusters of asbestos exposure. Registries can also track the impact of asbestos reduction programs. Asbestos Health Risks Asbestos is a naturally occurring mineral that has been found throughout the world. Even though it is toxic, it is used in manufacturing and construction in many countries around the world. Mesothelioma is a cancer that is caused by exposure to asbestos. It grows in the lining of organs like the lungs. Generally, those who develop mesothelioma show no signs of illness for a long time after their first exposure. It … END_OF_DOCUMENT_TOKEN_TO_BE_REPLACED