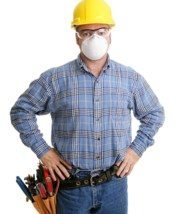 British people who’ve worked in high-risk jobs like carpentry and plumbing, especially before age 30, are at greatest risk of developing the deadly lung cancer,mesothelioma, according to a recent study in the British Journal of Cancer.

Mesothelioma is caused by asbestos exposure. Although regulations have reduced the amount of asbestos in both British and American buildings since the 1970s, the mesothelioma death rate in Britain has continued to climb among people over age 60. For the first time, researchers there decided to examine the connection between lifetime asbestos exposure in the workplace and home, and mesothelioma risk.

This study included 622 mesothelioma patients in England, Wales, and Scotland who were born after 1925, as well as a group of 1,420 similarly matched people without cancer. Participants were interviewed about their work history, as well as any other potential asbestos exposures during their lifetime.

The researchers discovered that carpenters faced the greatest mesothelioma risk –particularly those who had worked for 10 years or more in the industry before age 30. The authors say more than one out of every 10 British carpenters born in the 1940s is likely to die of mesothelioma or another type of cancer caused by asbestos.

The reduction in asbestos use since the 1970s may lead to a drop in future mesothelioma cases—but that is something the researchers will need to track. “The proportion will probably decline, but we don’t know by how much,” says lead author Julian Peto, Professor of Epidemiology at the London School of Hygiene and Tropical Medicine. “We are continuing to interview mesothelioma patients, and we are also getting lung samples for asbestos fiber analysis…to see whether young construction workers are still being exposed.”

The only non-work-related risk the study found was among people who had lived with a spouse or other family member who was potentially exposed to asbestos at work. Again, this exposure was most significant when it occurred before age 30.

Living close to an environmental source of asbestos, such as a power plant or asbestos factory, didn’t seem to increase the mesothelioma risk. Smoking also had no apparent effect on risk.

This study was conducted in Britain, which has the highest mesothelioma death rate in the world. In the United States death rates from the disease are three to five times lower, and occupational exposures are different, with plumbers and janitors facing a greater risk than carpenters. Yet the findings of this study are still relevant in the U.S. “The mesothelioma rate is lower in the U.S., but the concerns about continuing occupational and environmental asbestos exposure are the same as in Britain,” Dr. Peto says.

Asbestos will remain a worry to scientists and health professionals into the future, and this study underscores the need for continued vigilance. “We have to ensure that occupational (and other) exposure is avoided for everyone,” Dr. Peto says.

A Canadian study found that tracking trends in mesothelioma at the local level can help officials predict future mesothelioma cases. Most mesothelioma tracking efforts focus on the national scale and monitor cases across a country or region. This study, published in Cancer Causes and Control, looked at mesothelioma cases based on industrial sources of asbestos in Ontario and British Columbia. Growing Number of Cases Asbestos is a toxic material that is used in many commercial and industrial products. It’s durability and heat resistance made it very popular in products like construction materials, textiles, and vehicles. Mesothelioma is a deadly cancer caused by exposure to asbestos. It was first identified as a cancer-causing material in 1977 by the International Agency for … END_OF_DOCUMENT_TOKEN_TO_BE_REPLACED