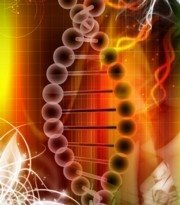 Mesothelioma, the so-called “asbestos cancer” may not strike randomly. A new study appears to support the idea that genetics can make people more susceptible to it.

Asbestos and a similar mineral called erionite are the only known causes of mesothelioma, a virulent cancer of the membranes that surround the lungs or abdominal organs. Currently, it is incurable. Most – though not all – mesothelioma patients worked in an industry that exposed them to asbestos. What is mysterious to scientists, however, is that only about 10 percent of people exposed to asbestos end up developing mesothelioma.

Now, a multi-center study out of Italy is shedding new light on a possible reason for the disparity in the development of mesothelioma. According to the authors, the answer may lie within patients’ genes.

“GMDR analysis showed a strong malignant pleural mesothelioma risk due to asbestos exposure and suggested a possible synergistic effect between asbestos exposure and rs1508805, rs2501618, and rs5756444,” writes lead author Dr. Sara Tunesi of the Unit of Medical Statistics and Cancer Epidemiology at the University of Piemonte Orientale in Novara, Italy.

The report suggests that people with these particular SNPs are more likely to development mesothelioma if they are exposed to asbestos. Eventually, this kind of information might be used to develop mesothelioma screening tools for the most susceptible people.

Unfortunately, tens of thousands of people were exposed to asbestos in the mining, plumbing, electrical, construction and shipbuilding industries before the link was made between the versatile fibrous mineral and the deadly lung-related cancer, mesothelioma. While many developed countries have banned or strictly regulated asbestos, the incidence of mesothelioma is continuing to rise in third world countries where asbestos regulations are often lacking.

The MESOMICS project is the most comprehensive dataset of mesothelioma genomics to date. The data in this resource can help researchers to design precision treatments for mesothelioma patients This project was created by an international collaboration between scientists from France, Chile, and the United States. Understanding Diagnosis Malignant pleural mesothelioma is a rare cancer caused by asbestos exposure. There are approximately 2,000 cases of mesothelioma diagnosed in the United States alone every year. Because it is so rare, the treatment options are very limited compared to other types of cancer. The limited treatment options combined with the cancer’s ability to spread without being noticed makes mesothelioma a deadly disease. Median overall survival for mesothelioma patients is a little over a … END_OF_DOCUMENT_TOKEN_TO_BE_REPLACED