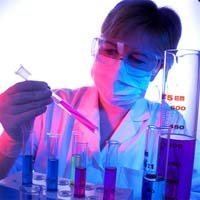 A drug derived from the eggs of leopard frogs may offer new hope for people with intractable malignant mesothelioma – especially if the drug is administered in combination with a malaria drug called dihydroartemisinin (DHA).

A newly-published Chinese report suggests that the combination has anti-tumor effects on non-small cell lung cancer and malignant mesothelioma not seen with conventional cancer drugs.

Onconase (also known as Ranpirnase) is a cytotoxic enzyme found in the stem cells of leopard frog eggs and early embryos. It has been used in chemotherapy to help treat malignant mesothelioma, a cancer that is highly resistant to standard cancer drugs.

Studies have shown that Onconase can help shrink mesothelioma tumors by attaching itself to specific receptors on the cancer cells that are not found in healthy cells.

Although DHA, the second drug in the experimental combination, is designed to treat malaria, it has also been shown to exhibit antitumor and antivirus activities. In the new study, researchers at Tongji University in Shanghai wanted to see if they could enhance the cancer-killing power of Onconase by combining it with DHA.

To test the impact of the combination, the research team applied it to NSCLC and mesothelioma cells in the laboratory (in vitro). When this resulted in a “synergistic effect” on the proliferation of mesothelioma cells, the team moved on to live mice.

The in vivo (in a live specimen) tests produced a similar result; the combination of Onconase and DHA disrupted the cancer cells’ ability to form blood vessels that feed a growing tumor. This ability is known as angiogenesis.

“These results imply that the anti-angiogenesis effects may make important contributions to the in vivo antitumor effects of the Onc/DHA combination treatment,” writes study author Dr. Ruling Shen with the School of Life Science and Technology at Tongji University.

A Novel Therapy for Mesothelioma

The standard chemotherapy approach to mesothelioma is a combination of pemetrexed (Alimta) and a platinum-based drug such as cisplatin. While this is widely accepted as the best first-line treatment, it is only marginally effective and does not typically extend mesothelioma survival by more than a few months.

For this reason, cancer researchers around the globe are actively looking for new drug options with the potential to improve mesothelioma treatment outcomes. This new study suggests that the prospects for the Onc/DHA combination are good.

The report concludes, “The Onc/DHA combination therapy may have the potential to become a novel regimen for NSCLC and mesothelioma.”

Researchers in Iran tested the safety of a new version of the drug pemetrexed in patients with non-small cell lung cancer and malignant pleural mesothelioma. This drug is used to treat these patients when they are not able to get surgery for their cancer. The researchers were able to determine that pemetrexed is safe in patients with non-squamous non-small cell lung cancer. Treatment Choices Malignant pleural mesothelioma is a lung-related cancer like non-small cell lung cancer. It is caused by exposure to asbestos. Treatment for mesothelioma usually involves chemotherapy, radiation therapy, and surgery. Patients may receive more than one type of treatment. This is called multimodal therapy. Pemetrexed is a chemotherapy drug that interrupts the cell replication process that helps … END_OF_DOCUMENT_TOKEN_TO_BE_REPLACED