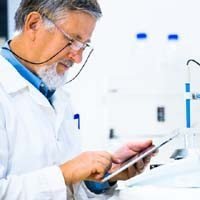 A new study finds that the combination of a naturally occurring protein and a drug used to treat multiple myeloma may offer a promising new approach to treating mesothelioma.

Both compounds have been studied on their own for their cancer-killing properties. The protein TRAIL is a part of the immune system secreted by most normal tissue cells. It triggers apoptosis in tumor cells by binding to what are called ‘death receptors’ in the cells. TRAIL has been studied as a potential cancer therapy for more than a decade and, although no survival benefit has yet been demonstrated, TRAIL treatment has been shown to improve the effectiveness of several other types of cancer drugs. It is also less likely than other types of therapy to cause side effects because it is a compound that cells recognize.

Bortezomib, which is sold under the brand name Velcade, is a proteasome inhibitor (PI), a type of drug that blocks the ability of cells to break down proteins. It is currently approved for the treatment of multiple myeloma patients who have had a relapse and for mantle cell lymphoma. Another PI called MG132 was found to induce apoptosis in mesothelioma cells in a 2008 study.

In the new multi-center study published in the open access medical journal BMC Cancer, doctors treated mesothelioma cell samples with either bortezomib or MG132 alone or in combination with TRAIL therapy. They found that, while each agent by itself did induce “limited apoptosis” in the mesothelioma cells, it was when TRAIL was combined with a PI that the best results were seen. The team reports that the “TRAIL and PI combination triggered a robust apoptosis in all three malignant pleural mesothelioma cell lines without effecting normal mesothelial cells.”

In their published summary, the authors concluded that the combination of TRAIL and PI “may represent an effective new treatment for malignant pleural mesothelioma.” Mesothelioma is diagnosed in approximately 2,500 people in the U.S. each year. Because of its resistance to conventional therapy, treatments that incorporate immunotherapy or gene therapy are a major focus of current research.

A new study from the University of Sydney showed that cannabis had some anti-cancer effects in mesothelioma. Parts of the marijuana plant have been used for centuries to treat a wide variety of ailments. This includes cancers like pleural and peritoneal mesothelioma and cancer-related pain. We have all heard of medical marijuana. Various states have either legalized its use for specific patients. Many are reviewing its legality for various diseases. Cannabis and Mesothelioma Survival Mesothelioma is a deadly disease with few treatment options. Alternative treatments consist of any approach considered non-conventional. This may include herbs, vitamins, minerals, and other natural non-toxic supplements. When used with conventional approaches, these alternative modalities are often called “complementary.” Surveys suggest that over 70% of … END_OF_DOCUMENT_TOKEN_TO_BE_REPLACED