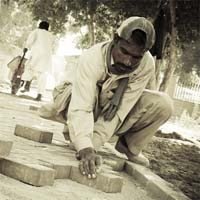 Pakistan may be on the brink of banning the leading cause of mesothelioma. The mineral asbestos, used for decades in various industries, is believed to be responsible for nearly all cases of mesothelioma, an intractable cancer of the linings around organs. Now, the National Assembly’s Standing Committee on Human Resource Development in Pakistan is recommending that the use and importation of asbestos be permanently banned in the country.

The committee made the recommendation after a series of hearings on asbestos and its link to mesothelioma. Federal Human Resource Secretary Raja Ahsan told the committee that asbestos presents a “major threat” for mesothelioma and cancer among Pakistan’s industrial workers. Asbestos consumption continues to rise in Pakistan; One study shows that the figure quadrupled from 1,590 tons to 9,170 tons from 2000 to 2004 alone.

The director of the Centre for the Improvement of Working Conditions and Environment argued, however, that a total ban is too strong and suggested that some asbestos-containing products are not a threat. He argued that products in which asbestos is sealed should be exempt from the ban. Of the countries bordering Pakistan, only China has enacted its own asbestos ban.

Mesothelioma is a cancer of internal membranes that often strikes people who have worked or lived around asbestos decades after their initial exposure. It is believed to be caused by chronic irritation from asbestos fibers that the body cannot expel. The prognosis for mesothelioma is typically poor.

Medical experts worldwide agree that asbestos dramatically increases the risk for mesothelioma as well as asbestosis, lung cancer and lung scarring. A 2006 letter to the Pakistani government from the All Pakistan Federation of United Trade Unions stated, “The scientific and medical evidence on the dangers of this building material is beyond doubt.” The National Assembly’s recommendation for a ban will be sent to the Ministry of Commerce and Federal Board of Revenue, which is responsible for banning imports.

Fifty-five countries, including most members of the European Union, have asbestos bans in place. Asbestos use remains legal in the U.S. where there is no comprehensive ban.

Five out of ten Korean oncologists surveyed feel positive about using an aerosolized chemotherapy system called PIPAC for mesothelioma and other types of cancer. PIPAC stands for pressurized intraperitoneal aerosol chemotherapy. The system turns liquid chemotherapy drugs into a spray that can be applied with a nebulizer. It was developed to treat surface malignancies like peritoneal mesothelioma that can be hard to treat with standard methods.  PIPAC can be used in conjunction with mesothelioma surgery or by itself as either a palliative or curative treatment.  The technology is still very new. Many doctors have never used it. But research conducted by the Seoul National University College of Medicine shows Korean doctors are ready to embrace it. How Spray-on Chemotherapy Works … END_OF_DOCUMENT_TOKEN_TO_BE_REPLACED