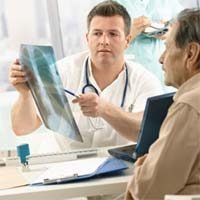 A procedure normally used to help alleviate pain has been used to successfully stop a case of recurrent malignant pleural mesothelioma in Japan.

Most of the time, this technology is used to destroy small tumors or a treat small area of cancer to alleviate symptoms such as pain or discomfort.

But thoracic surgeons at the Hyogo College of Medicine in Hyogo, Japan say their new case study suggests that the procedure should also be considered as a definitive treatment — especially for mesothelioma patients for whom surgery is not a viable option.

In a new report in the Annals of Thoracic Surgery, the researchers detail the case of a 55-year-old man with malignant pleural mesothelioma.

Like most mesothelioma patients, especially those who are younger and in overall good health, the subject was treated with a combination of several different types of mesothelioma therapies.

In this case, those therapies included chemotherapy to reduce the size of the mesothelioma tumor, radical EPP (extrapleural pneumonectomy) surgery to remove the diseased pleural lining and nearest lung, and radiotherapy to kill residual mesothelioma cells.

Although the multimodal approach did hold the cancer at bay for more than two-and-a-half years, when the patient’s mesothelioma recurred, the treatment options were limited.

“Surgery was considered a problem for the patient because of the previous extrapleural pneumonectomy and difficult tumor location,” writes thoracic surgeon Akifumi Nakamura, MD.

So Dr. Nakamura and his colleagues decided, instead, to treat the tumor with radiofrequency ablation.

With CT or ultrasound guidance, a small probe is inserted directly into the treatment area, which is heated to destroy the cells. Unlike other mesothelioma treatments, RFA has little effect on the surrounding healthy tissue.

While RFA has long been used to manage pain by destroying nerve cells, it’s utility as a cancer treatment is still evolving. Since the 1990s, it has been used in combination with other therapies to treat tumors in the liver, lung, kidneys, bone, pancreas, thyroid, and breast. RFA is considered a low-risk procedure that usually causes few side effects.

In the case of the Japanese mesothelioma patient, the results of RFA treatment were excellent. There were no complications from the procedure, which significantly reduced the size of his tumor. Just as importantly, there was no further mesothelioma recurrence or tumor growth.

The research team concludes, “Radiofrequency ablation should be considered an option to treat recurrence of malignant pleural mesothelioma.”

A similar technology called microwave ablation is currently under evaluation at Mayo Clinic for the treatment of lung cancer in surgically high risk patients.

Researchers in Iran tested the safety of a new version of the drug pemetrexed in patients with non-small cell lung cancer and malignant pleural mesothelioma. This drug is used to treat these patients when they are not able to get surgery for their cancer. The researchers were able to determine that pemetrexed is safe in patients with non-squamous non-small cell lung cancer. Treatment Choices Malignant pleural mesothelioma is a lung-related cancer like non-small cell lung cancer. It is caused by exposure to asbestos. Treatment for mesothelioma usually involves chemotherapy, radiation therapy, and surgery. Patients may receive more than one type of treatment. This is called multimodal therapy. Pemetrexed is a chemotherapy drug that interrupts the cell replication process that helps … END_OF_DOCUMENT_TOKEN_TO_BE_REPLACED