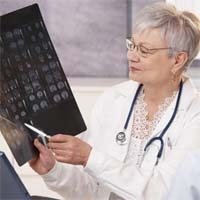 A recent study has concluded that palliative radiotherapy produces a response rate in malignant pleural mesothelioma that is comparable to chemotherapy.

A recent analysis of 54 mesothelioma cases at a hospital in Cheltenham, England found that 43 percent of patients who received palliative radiotherapy according to their hospital’s policy, responded to the treatment. Based on the results of their pre- and post-therapy CT scans, 22 of the 54 mesothelioma patients analyzed experienced a partial response and 1 patient had a complete response. Fifty-seven percent reported some improvement in their symptoms.

In an effort to help determine which mesothelioma patients are most likely to respond to radiotherapy, the research team correlated treatment responses with the European Organisation for Research and Treatment of Cancer (EORTC) prognostic index. Among the patients judged to be in the ‘good’ prognosis group, 56 percent responded to the radiotherapy, compared to just 7 percent of patients in the ‘poor’ prognosis group. The EORTC good and poor prognostic mesothelioma groups had survival of 7.1 and 2.1 months respectively from the start of their treatment.

In addition to the EORTC index, survival following radiotherapy treatment was also correlated with each patient’s mesothelioma histological subtype, performance status, treatment response and hemoglobin level. Neither tumor volume nor the stage of the patients’ cancer was associated with prognosis. The study concluded that palliative radiotherapy for mesothelioma “produces a response rate that is equivalent to chemotherapy” and recommends the EORTC prognostic index as a method of deciding which patients may benefit from this treatment most.

Although the English study was focused solely on the role of radiotherapy, a number of previous studies have found radiotherapy to be most effective when used as part of a multimodality approach to mesothelioma treatment. One such study from the National Cancer Institute in Cairo found that more than 75 percent of patients who had radiation as part of their treatment protocol saw a response (either a decrease in the size of their tumors or in the severity of their symptoms). Recurrence rates were lowest in patients who had high dose hemithorax (one side of the chest) irradiation, a method typically reserved for the healthiest mesothelioma patients.

Jenkins, P et al, “Re-evaluation the role of palliative radiotherapy in malignant pleural mesothelioma”, June 7, 2011, European Journal of Cancer, Epub ahead of print. El Hossieny, Hesham et al, “Analysis of the Effect of Radiotherapy on Malignant Pleural Mesothelioma when Given on Adjuvant or Palliate Basis”, January 1, 2010.

Malignant pleural mesothelioma is a rare type of cancer. A growing number of mesotheliomas are being treated with novel immunotherapies. But clinicians still lack a meaningful way to measure mesothelioma treatment response. An article in Seminars in Nuclear Medicine lists five ways clinicians can measure how well a treatment plan is working. And a new artificial intelligence tool can measure mesothelioma tumors without any human input. Artificial intelligence may provide the key to treatment response in the future. Measuring Mesothelioma Treatment Response In malignant pleural mesothelioma, complex tumors result in inconsistent clinical assessment. There are five common ways to measure if a treatment plan is working. Generally, a clinician will look to see if the size or weight of a tumor has … END_OF_DOCUMENT_TOKEN_TO_BE_REPLACED