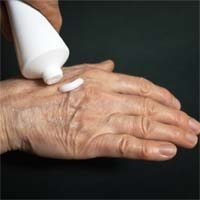 Researchers at Griffith University are working on a new kind of mesothelioma treatment – one that could be delivered through the skin.

The report in the Courier Mail makes reference to animal research on “certain small molecules” that reportedly have the potential to penetrate the skin and target the mitochondria of mesothelioma cells. Mitochondria are one of the most important power sources for cells, producing adenosine triphosphate, a source of chemical energy.

The Griffith University project, under the leadership of Medical Professor Jiri Neuzil, is focusing on a drug that would be applied to the skin as a patch or cream. The drug would enter the blood stream through the skin and would target only mesothelioma cells. Studies of the drug in mice have shown promise and Professor Neuzil says his team is now working toward human mesothelioma trials.

“We have a good chance here but I don’t want to pre-empt it with success. We’ve got the clinical trial to go yet to see if it works in humans,” Neuzil told the Courier Mail.  Professor Neuzil is head of the Apoptosis Research Group within the School of Medical Science at Griffith University. The study of mitochondria as targets for anti-cancer drugs is one of his primary areas of research.

Mesothelioma research has taken on a special urgency in Australia, where the number of people contracting the rare cancer is continuing to rise. Mesothelioma is caused by exposure to asbestos. Needle-like shards of the mineral lodge in the tissues when inhaled or ingested, triggering a cascade of physiological reactions that can result in mesothelioma even decades later.

In other research on non-traditional cancer drug delivery methods, researchers at Oregon State University recently released preliminary findings on a nanocarrier-based system for delivering drugs into the lungs by inhalation. Early results in lung cancer have been promising and the method could eventually prove to be useful in the treatment of patients with the pleural form of mesothelioma, which has some similarities to lung cancer.

The MESOMICS project is the most comprehensive dataset of mesothelioma genomics to date. The data in this resource can help researchers to design precision treatments for mesothelioma patients This project was created by an international collaboration between scientists from France, Chile, and the United States. Understanding Diagnosis Malignant pleural mesothelioma is a rare cancer caused by asbestos exposure. There are approximately 2,000 cases of mesothelioma diagnosed in the United States alone every year. Because it is so rare, the treatment options are very limited compared to other types of cancer. The limited treatment options combined with the cancer’s ability to spread without being noticed makes mesothelioma a deadly disease. Median overall survival for mesothelioma patients is a little over a … END_OF_DOCUMENT_TOKEN_TO_BE_REPLACED