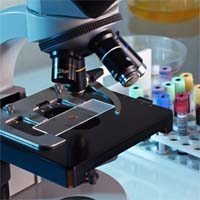 Another study has confirmed that the biomarker mesothelin may be a valuable warning sign ofmesothelioma in asbestos-exposed workers. In fact, it may rise sharply in the months preceding the onset of symptoms.

Medical researchers have long known that exposure to the mineral asbestos dramatically increases the risk of developing malignant pleural mesothelioma. But doctors have struggled to find a way to identify which asbestos-exposed people are at highest risk. It is a significant problem because, as the authors of a new German study on the subject observe, “In patients developing malignant pleural mesothelioma (MPM) or lung cancer, using effective tumour markers is the quickest way to ensure early diagnosis and improve survival time.”

But which biomarkers to focus on and how high they may go before triggering disease has remained a mystery. To find some answers, researchers with the Institute of Occupational and Social Medicine in Aachen, Germany measured blood levels of mesothelin and osteopontin, two potential mesothelioma biomarkers, in asbestos-exposed and non-asbestos-exposed people, over time.

While older participants were found to have higher levels of both markers, there was no association between climbing levels and the duration of a study subject’s asbestos exposure. Likewise, no relationship was found between climbing levels and non-cancerous asbestos diseases. To see how high mesothelin and osteopontin levels might climb without being disease indicators, the researchers then looked more carefully at all patients with at least a 10% increase in levels of either biomarker. Most of these patients did not go on to develop mesothelioma or lung cancer. However, in two of the patients who eventually did develop mesothelioma, there was a steep rise in the level of mesothelin between 6 and 18 months before symptoms developed.

While the sample size of mesothelioma patients was far too small to show a definite correlation between rapidly-rising mesothelin levels and mesothelioma, the researchers were able to draw some conclusions about biomarker levels in general; “Fixed cut-off values for deciding between intensive clinical work-up and continued surveillance appeared inadequate for the evaluated markers,” they write in the International Archives of Occupational and Environmental Health. This study suggests that, while a sharp rise in mesothelin should be a serious warning sign in asbestos-exposed individuals, neither mesothelin nor osteopontin alone are enough to predict the development of mesothelioma.

Malignant pleural mesothelioma is a rare type of cancer. A growing number of mesotheliomas are being treated with novel immunotherapies. But clinicians still lack a meaningful way to measure mesothelioma treatment response. An article in Seminars in Nuclear Medicine lists five ways clinicians can measure how well a treatment plan is working. And a new artificial intelligence tool can measure mesothelioma tumors without any human input. Artificial intelligence may provide the key to treatment response in the future. Measuring Mesothelioma Treatment Response In malignant pleural mesothelioma, complex tumors result in inconsistent clinical assessment. There are five common ways to measure if a treatment plan is working. Generally, a clinician will look to see if the size or weight of a tumor has … END_OF_DOCUMENT_TOKEN_TO_BE_REPLACED