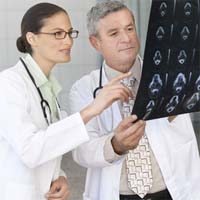 Two recent mesothelioma studies suggest that anti-angiogenesis drugs may not be as successful as previously hoped in treating mesothelioma.

An anti-angiogenesis drug is a substance that inhibits the growth of new blood vessels (angiogenesis). The theory was first developed by Dr. Judah Folkman who pioneered research on tumor angiogenesis, the process by which a tumor attracts blood vessels to nourish itself and sustain growth. According to his theory, by introducing drugs that stop the formation of new blood vessels (anti-angiogenesis) tumors would not get the nourishment they need and would be unable to continue growing. This theory has attracted a lot of attention and investment in mesothelioma research.

According to the study, of the 47 evaluable patients, 4 patients (9%) had objective responses (tumors getting smaller), 16 patients (34%) had stable disease (no increase or decrease in tumors), 20 patients (43%) had disease progression, 2 patients (4%) had symptomatic deterioration, and 1 patient (2%) had early death. The median overall survival was 9.5 months. The researchers concluded that “cediranib monotherapy has modest single-agent activity in malignant pleural mesothelioma after platinum-based therapy.”

And a Canadian study recently tested sunitinib, another VEGF inhibitor in 35 malignant mesothelioma patients. Only one patient had an objective response where the tumor decreased in size. The median survival was 8.3 months in the group of patients that had previously received cisplatin-based chemotherapy. Median survival was 6.7 months in the patients that were previously untreated. The researchers concluded that “sunitinib, similar to other angiogenesis inhibitors, has limited activity in malignant pleural mesothelioma.”

According to the National Cancer Institute, there are at least four anti-angiogenesis clinical trials currently recruiting mesothelioma patients for additional mesothelioma research. These include: 1) Avastin Plus Pemetrexed-cisplatin Study, 2) Axitinib in Malignant Mesothelioma, 3) Pilot Study of Bisphosphonate Therapy (Zoledronic Acid) in Patients With Malignant Mesothelioma (UAB 0901), 4) Sunitinib and Hydroxychloroquine in Treating Patients With Advanced Solid Tumors That Have Not Responded to Chemotherapy.

Researchers in Iran tested the safety of a new version of the drug pemetrexed in patients with non-small cell lung cancer and malignant pleural mesothelioma. This drug is used to treat these patients when they are not able to get surgery for their cancer. The researchers were able to determine that pemetrexed is safe in patients with non-squamous non-small cell lung cancer. Treatment Choices Malignant pleural mesothelioma is a lung-related cancer like non-small cell lung cancer. It is caused by exposure to asbestos. Treatment for mesothelioma usually involves chemotherapy, radiation therapy, and surgery. Patients may receive more than one type of treatment. This is called multimodal therapy. Pemetrexed is a chemotherapy drug that interrupts the cell replication process that helps … END_OF_DOCUMENT_TOKEN_TO_BE_REPLACED