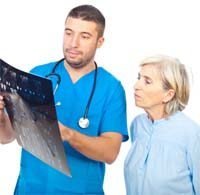 Is it always necessary to remove a portion of the diaphragm when performing radical mesothelioma surgery? A team of researchers in the UK and Italy don’t think so.

They have just published their assessment of 314 pleural mesothelioma patients who underwent surgery for their disease to see how critical a role the diaphragm appeared to play in their recovery.

Extrapleural pneumonectomy (EPP) is the most radical form of pleural mesothelioma surgery. It involves not only removal of the diseased pleural lining but also the lung on the side where the mesothelioma tumor was located and the diaphragm on that side.

Extended pleurectomy/decortication (EPD) is almost as extensive, removing the pleura and a portion of the diaphragm, but leaving the lung in place. Both surgeries carry significant risks and lengthy recovery and are only performed in large medical centers by experienced surgeons.

The Role of the Diaphragm in Mesothelioma Recovery

Mesothelioma is an aggressive cancer that spreads easily and quickly within the chest and abdomen. The diaphragm is typically included in mesothelioma surgery in order to minimize the chance that new mesothelioma tumors could take hold there.

But the new report published in the European Journal of Cardiothoracic Surgery suggests that leaving the diaphragm intact – which can mean less trauma for the patient and a shorter, easier surgery – may be fine in some cases.

Of the 314 mesothelioma surgery patients they evaluated, almost 38 percent showed “no evidence of diaphragmatic involvement” when their tissue was examined by pathologists.

Just as importantly, the group found no evidence that the spread of mesothelioma to the diaphragm had an impact on overall mesothelioma survival after surgery.

“It may therefore theoretically be unnecessary to resect the diaphragm in all cases, and a pleurectomy-decortication could suffice,” writes surgeon and researcher Dr. Annabel J. Sharkey of University Hospitals Leicester.

Unfortunately, the findings are not as clear cut as they might first appear.

Although many surgery patients had no mesothelioma cells on their diaphragms and although those who did did not necessary experience shorter survival, the researchers conceded that leaving the diaphragm in place could theoretically leave behind visible cells to regrow mesothelioma tumors, a situation known as an R2 resection.

“There is an unknown risk of R2 rection which would prejudice survival and as such we would advocate resecting the diaphragm in all cases to avoid an R2 resection,” concludes Dr. Sharkey.

But the study does leave the door open to different approaches. Because every case of mesothelioma is different, physicians and patients work together to develop the most appropriate surgical treatment plan for each situation.

Sharkey, AJ, et al, “The management of the diaphragm during radical surgery for malignant pleural mesothelioma”, March 22, 2016, “European Journal of Cardiothoracic Surgery, Epub ahead of print

Researchers in Iran tested the safety of a new version of the drug pemetrexed in patients with non-small cell lung cancer and malignant pleural mesothelioma. This drug is used to treat these patients when they are not able to get surgery for their cancer. The researchers were able to determine that pemetrexed is safe in patients with non-squamous non-small cell lung cancer. Treatment Choices Malignant pleural mesothelioma is a lung-related cancer like non-small cell lung cancer. It is caused by exposure to asbestos. Treatment for mesothelioma usually involves chemotherapy, radiation therapy, and surgery. Patients may receive more than one type of treatment. This is called multimodal therapy. Pemetrexed is a chemotherapy drug that interrupts the cell replication process that helps … END_OF_DOCUMENT_TOKEN_TO_BE_REPLACED