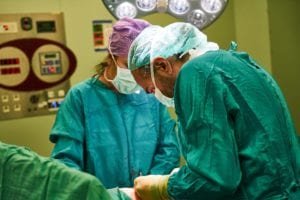 A team of researchers at the University of Pennsylvania say they have come up with better way to measure the effects of surgery-related inflammation on subsequent mesothelioma therapies.

Their results could help other scientists predict the effectiveness of new and existing adjuvant mesothelioma treatments.

Because malignant mesothelioma is so difficult to treat, most patients are treated with a combination of different therapies.

While not all patients are candidates for surgery, a number of studies have suggested that mesothelioma patients who do have surgery as one of their treatments tend to live longer than those who only have other types of treatments.

The challenge is that surgery itself can be so disruptive to the body that it actually alters the effectiveness of subsequent treatments. When tissue is damaged by mesothelioma surgery, it can trigger the production of an inflammation marker called IL-6, and IL-6 may make that tissue less receptive to other mesothelioma treatments.

“IL-6 is predictive of response to many cancer therapies and it is linked to various molecular and cellular resistance mechanisms,” explain the authors of the new study in Lasers in Surgery and Medicine.

The goal of the new research was to develop a mouse model for testing how IL-6 interferes with other mesothelioma treatments.

The researchers started with mice that had been induced to grow mesothelioma tumors. Then, some of the mice had their tumors removed while others had a “sham” surgery in which incisions were made but the tumor itself was not removed.

Researchers measured the timing and extent of IL-6 release and then compared those levels with the IL-6 in the blood serum of human malignant pleural mesothelioma patients who underwent macroscopic complete resection.

They found that both surgical resection and sham surgery induced about the same level of IL-6 in the mice as human patients who’d had surgery, but that sham surgery was a simpler and possibly more accurate testing model.

“The tumor incision model induces IL-6 release as is seen in the surgical setting, yet it avoids the limitations of the surgical resection model,” writes lead investigator and pharmacologist Richard Davis, PhD. “The tumor incision model can be employed for novel investigations of the effects of surgically-induced, acute inflammation on therapeutic response…”

Although the team was specifically focused on the impact of IL-6 on photodynamic therapy for mesothelioma, they say their mouse model could also potentially be used to see how other types of mesothelioma therapy are affected by IL-6 after surgery.

An estimated 2,500 Americans are diagnosed with mesothelioma each year and about the same number die of the disease, making it one of the rarest and most deadly forms of cancer.

Davis, R, IV, et al, “A Preclinical Model to Investigate the Role of Surgically-Induced Inflammation in Tumor Responses to Intraoperative Photodynamic Therapy”, May 2018, Lasers in Surgery and Medicine

Italian researchers say lung-sparing surgery can lead to long-term mesothelioma survival, even if surgeons take a more conservative approach.  Lung-sparing surgery for mesothelioma is also known as pleurectomy with decortication (P/D). P/D surgery is less extensive than the other main surgical approach for mesothelioma but it is also less risky. Now, doctors at Venice-Mestre Hospital say that, as long as it is performed early enough and combined with other treatments, lung-sparing surgery saves lives. Their report in the Journal of Thoracic Disease details the outcomes of 155 mesothelioma surgery patients tracked for a median of a year-and-a-half.  Extrapleural Pneumonectomy & Lung-Sparing Surgery Extrapleural pneumonectomy (EPP) is the most radical operation for pleural mesothelioma. In addition to removing the mesothelioma tumor … END_OF_DOCUMENT_TOKEN_TO_BE_REPLACED