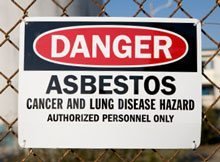 The asbestos ban instituted in Sweden more than 30 years ago had still not had any measurable impact on the incidence of malignant mesothelioma in the country as of 2009.

That is the conclusion reached by researchers at Sweden’s Institute of Environmental Medicine at the Karolinska Institute in Stockholm who just completed a major study of asbestos exposure and mesothelioma in Sweden. The group also found that plumbers were at especially high risk for mesothelioma.

Mesothelioma incidence data was gathered from the Swedish component of the 2009 Nordic Occupational Cancer Study, which included 6.78 million people, as well as the Swedish Cancer Registry and the Swedish Total Population Registry.

The population data was divided into three periods between 1961 and 2009 and then linked to a matrix of likely exposures to carcinogens on the job.

Asbestos, a naturally-occurring mineral which was used for decades as an insulator and building product additive, is the primary carcinogen linked to mesothelioma diagnosis.

The team identified 3,716 cases of malignant mesothelioma in Sweden during the study period. Eighty-nine percent of the cases occurred in men. Of the 280 occupations analyzed, 24 of them were red-flagged as potentially increasing the risk for mesothelioma.

“Among men, increased risks of mesothelioma of the pleura were observed in male-dominated occupations, with the greatest elevation of risk among plumbers,” writes Nils Plato, a Chemical Engineer with the Institute of Environmental Medicine.

In women, occupations with increased mesothelioma risk included sewing, canning, packing, cleaning and postal work. (Among the canners and cleaners, the risk existed, even though there was no evidence of asbestos exposure, suggesting that these women may have been exposed elsewhere.)

The Asbestos Ban and Mesothelioma Cases

But perhaps the most sobering news to come out of the Swedish study was the fact that, even though asbestos was banned in Sweden in 1982, the numbers of people being diagnosed with mesothelioma has not decreased.

“The asbestos ban of 1982 has yet to show any clear effect on the occurrence of mesothelioma in this cohort,” concludes the report in Epidemiology and Health.

The problem is mesothelioma’s long latency period, or the length of time between exposure to a carcinogen and disease development. Mesothelioma has one of the longest latency periods of any cancer, taking as long as 50 years after asbestos exposure for symptoms to occur.

The result is that many of today’s Swedish mesothelioma patients were exposed to asbestos decades before the country put the ban into place.

Sweden is one of 58 countries that have banned asbestos. Although the US places strict regulations on the handling and disposal of asbestos, the toxin has not been banned.

Plato, N, et al, “Occupations and mesothelioma in Sweden: updated incidence in men and women in the 27 years after the asbestos ban”, September 20, 2016, Epidemiology and Health, eCollection 2016

Researchers in Iran tested the safety of a new version of the drug pemetrexed in patients with non-small cell lung cancer and malignant pleural mesothelioma. This drug is used to treat these patients when they are not able to get surgery for their cancer. The researchers were able to determine that pemetrexed is safe in patients with non-squamous non-small cell lung cancer. Treatment Choices Malignant pleural mesothelioma is a lung-related cancer like non-small cell lung cancer. It is caused by exposure to asbestos. Treatment for mesothelioma usually involves chemotherapy, radiation therapy, and surgery. Patients may receive more than one type of treatment. This is called multimodal therapy. Pemetrexed is a chemotherapy drug that interrupts the cell replication process that helps … END_OF_DOCUMENT_TOKEN_TO_BE_REPLACED