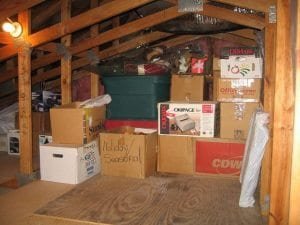 But even people who have long since thrown away their asbestos holiday décor could face a mesothelioma risk in their own attics when they access or store their decorations. That is because millions of American homes still contain Zonolite insulation, a brand of vermiculite insulation known to contain fibers of asbestos.

Although asbestos-containing insulation is not believed to pose a mesothelioma risk when it is undisturbed, moving boxes around or stepping on the old insulation in an attic can create small clouds of deadly dust. This dust can then be transported into the living areas on the outside of boxes or even on the clothing of family members who went into the attic. Accidently inhaling or ingesting the dust, especially if it happens repeatedly, can carry asbestos fibers into the body where they can trigger mesothelioma even decades later.

To reduce the risk of mesothelioma, the EPA advises people who own older homes not to disturb Zonolite insulation, not to store items near it, and never to attempt to remove it. Despite the danger, some homeowners ignore the warnings and the mesothelioma risk. A 2012 California study estimated the average asbestos exposure from homeowner removal of Zonolite insulation at 0.0002 fibers/cubic centimeter/year. While the amount is far lower than that of people who work around asbestos, it is enough to concern the EPA, which has said that there is no “safe” level of asbestos exposure.

To stay safe, store holiday decorations and other boxes well away from insulation. If you have to enter an attic containing vermiculite insulation, protect yourself against mesothelioma by walking on the boards to minimize disturbance. If you are unsure about the potential asbestos content of your insulation, contact an abatement professional for advice.

Mesothelioma typically occurs only after repeated asbestos exposure and, often, many years after the exposure has ended. An estimated 2,500 Americans dies of mesothelioma each year.

Finley, BL, “Evaluation of tremolite asbestos exposures associated with the use of commercial products”, February 2012, Critical Reviews in Toxicology, pp. 119-146

A new study published in Thoracic Cancer discussed the impact of COVID‐19 pandemic on new mesothelioma diagnoses in Italy. Malignant mesothelioma is a rare disease of great interest to the scientific community and to public health. This is due to its high lethality and its association with asbestos exposure. The timely diagnosis of mesothelioma is important. Although it may not change the prognosis of the disease, it can help in treatment strategies. It can also help in documenting previous exposure to asbestos. This can contribute to any request for compensation. New Study Shows Promising Results During the COVID-19 pandemic, there was a delay in the diagnosis of oncological diseases. This was because many departments were converted into COVID wards. And … END_OF_DOCUMENT_TOKEN_TO_BE_REPLACED