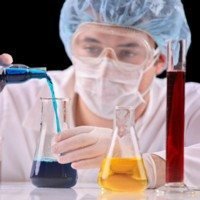 There is new evidence that the primary ingredient in vinegar might eventually be used to help fight deadly malignant mesothelioma.

Acetic acid is the colorless organic compound that gives vinegar its pungent smell and distinctive sour taste. It makes up 3 to 5% of vinegar. (The remaining 95-97% is water) In its pure form, acetic acid is used in the production of cellulose acetate for photographic film and polyvinyl acetate for wood glue, as well as some synthetic fibers and fabrics. It is also used as a food additive to regulate the acidity of certain foods and condiments.

Acetic acid was added into the cell cultures at different concentrations and for different lengths of time. The researchers then analyzed the effects of the acetic acid on the various kinds of cancer cells using three different testing methods. The acid had a damaging effect on all of the cell lines tested, but was especially lethal to the mesothelioma cells.

“Acetic acid at 0.5% for 10 minutes induced almost complete cell death of ACC-MESO1 and MSTO-211H,” reports lead researcher Dr. Susumu Okabe in the Journal of Gastroenterology and Hepatology. Dr. Okabe and his colleagues conclude that acetic acid, applied directly to tumors, “may be a feasible approach for the treatments of gastric cancer and possibly other malignancies.”

It should be noted that the new study only tested pure acetic acid – not vinegar – and only tested it as a topical treatment. Although much has been written about the potential cancer-fighting properties of vinegar as a dietary supplement, there is still no scientific evidence that consuming acetic acid in vinegar can combat mesothelioma or any other type of cancer.