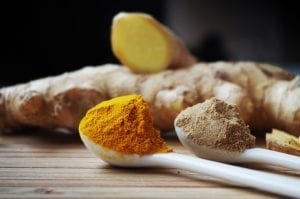 The bright yellow chemical that gives turmeric its spicy kick has scored yet another win as a possible treatment for malignant mesothelioma. This time, scientists used it on lab rats to successfully shrink one of the most aggressive types of mesothelioma tumors.

The plant polyphenol curcumin has been the subject of numerous malignant mesothelioma studies in recent years, in part because of its powerful anti-inflammatory properties.

Curcumin as a Mesothelioma Treatment

The latest study of cucumin in malignant mesothelioma treatment was conducted by French scientists at several different research centers. The team used cells taken from rats that had been induced to develop one of the deadliest and most aggressive subtypes of asbestos cancer called sarcomatoid mesothelioma.

The rats began to develop sarcomatoid mesothelioma tumors in their abdomens within weeks of being injected with asbestos. The French scientists tested curcumin on cells from these tumors to determine the ideal killing dose.

The team then used the sarcomatoid mesothelioma rats to test the treatment in vivo, in living animals. Compared with an epigenetic drug called SAHA, curcumin injected directly into the peritoneal cavities of sick rats was more effective and started to destroy their tumors in less two weeks.

“The treatment of tumor-bearing rats with 1.5 mg/kg curcumin on days 7, 9, 11 and 14 after tumor challenge dramatically reduced the mean total tumor mass at day 16,” reports Dr. Daniel L. Pouliquen, lead author on the report in Oncotarget.

Although SAHA also produced necrosis (tissue death) in the mesothelioma tumors, the damage to the tumors was not nearly as extensive and scientists still found pockets of resistant mesothelioma cells throughout the abdomens of the rats.

Small residual mesothelioma tumors were also left behind after curcumin treatment, but scientists found that there were fewer of them and they tended to be surrounded by by cancer-killing T cells.

The tumors themselves were also different, expressing less of the chemicals associated with growth and aggression than the tumors left behind after SAHA treatment.

“These data open up interesting new prospects for the therapy of sarcomatoid mesothelioma with curcumin and its derivatives,” concludes Dr. Pouliquen.

Earlier this year, scientists in the Department of Experimental Medicine at the University of Rome conducted a similar experiment and that found that intraperitoneal curcumin extended survival in mice with mesothelioma.

Malignant mesothelioma can be a deadly consequence of asbestos exposure. Although this membrane cancer most often develops on the lining around the lungs, the peritoneal form, which grows on the abdominal wall, makes up about a fifth of cases in the US every year.

The world’s longest-living mesothelioma survivor, Paul Kraus, author of Surviving Mesothelioma and Other Cancers, was originally diagnosed with peritoneal mesothelioma.

An international group of researchers have provided recommendations for countries to create a mesothelioma registry. Mesothelioma registries are great tools to monitor the negative effects of asbestos. It can help to identify clusters of asbestos exposure. Registries can also track the impact of asbestos reduction programs. Asbestos Health Risks Asbestos is a naturally occurring mineral that has been found throughout the world. Even though it is toxic, it is used in manufacturing and construction in many countries around the world. Mesothelioma is a cancer that is caused by exposure to asbestos. It grows in the lining of organs like the lungs. Generally, those who develop mesothelioma show no signs of illness for a long time after their first exposure. It … END_OF_DOCUMENT_TOKEN_TO_BE_REPLACED