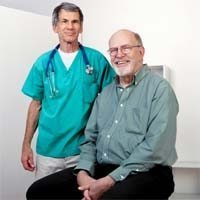 Mesothelioma patients who undergo surgery for their cancer may benefit from new biological implants to reconstruct their chest wall.

Malignant pleural mesothelioma is a cancer of the lining that surrounds the lungs and lines the thoracic (chest) cavity. Pleurectomy and decortication is a surgical procedure designed to improve mesothelioma symptoms like shortness of breath by removing cancerous tissues surrounding the lungs, freeing the lungs up to expand more normally.

During Pleurectomy and decortication, portions of the chest wall are removed and usually must be rebuilt. Often, this rebuilding is performed using synthetic materials. But a team of thoracic surgeons in the UK has just published a report on their success in using biological implants to rebuild the chest wall in patients with mesothelioma and other conditions requiring extensive thoracic surgery.

Their study involves a review of 44 patients who had thoracic surgery between August 2009 and August 2011. Twenty-nine of those patients had surgery for mesothelioma. The remaining 15 surgeries included in the study were for other malignancies, trauma surgeries or infection. During the 44 surgeries, a total of 76 biological patches were used (1 to 3 per patient). One mesothelioma patient died of pneumonia and two other patients died of other complications in the postoperative period. Their complications did not appear to be directly related to the type of implants used.

In a summary of their findings in the Annals of Thoracic Surgery, the team reports that none of the other patients in the study required further surgical exploration and none needed to have patches removed as a result of infection. A bioprosthesis is either an animal part or an implant that contains animal tissue. Biologically-based prosthetic patches of various kinds have been used with success in other types of surgery, including heart surgery where the valves of cows and pigs may be used to replace diseased valves.

Based on their findings after 44 consecutive thoracic surgery patients, the UK team concluded, “Our initial experience of using bioprosthetic patches for soft issue reconstruction in thoracic surgery has proven satisfactory with overall acceptable results.” They noted that infection rates remained low even among procedures that were performed in “contaminated environments.” They recommend that biologic prostheses be considered as a surgical option for mesothelioma patients and others who undergo major thoracic procedures.

There are approximately 2,000 cases of mesothelioma diagnosed in the U.S. every year and the majority are pleural mesothelioma patients.

Barua, A, “Initial Experience with the use of Biological Implants for Soft Tissue and Chest Wall Reconstruction in Thoracic Surgery”, September 6, 2012, Annals of Thoracic Surgery, Epub ahead of print.

An international group of researchers have provided recommendations for countries to create a mesothelioma registry. Mesothelioma registries are great tools to monitor the negative effects of asbestos. It can help to identify clusters of asbestos exposure. Registries can also track the impact of asbestos reduction programs. Asbestos Health Risks Asbestos is a naturally occurring mineral that has been found throughout the world. Even though it is toxic, it is used in manufacturing and construction in many countries around the world. Mesothelioma is a cancer that is caused by exposure to asbestos. It grows in the lining of organs like the lungs. Generally, those who develop mesothelioma show no signs of illness for a long time after their first exposure. It … END_OF_DOCUMENT_TOKEN_TO_BE_REPLACED