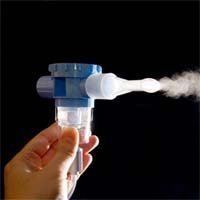 Mesothelioma patients may eventually be inhaling their treatment medications instead of receiving them intravenously if current research in Scotland goes according to plan. Scientists at the University of Strathclyde in Glasgow are experimenting with a method for delivering chemotherapy medicine directly into the lungs where mesothelioma is triggered.

Although mesothelioma is not a lung cancer, it is usually the result of inhalation or ingestion of airborne asbestos fibers.  In pleural mesothelioma, inhaled fibers lodge deep in the lung tissue, setting up a cycle of chronic irritation and inflammation that eventually affects the membrane around the lungs. As mesothelioma spreads over the pleural membrane, it can impede the lungs’ ability to expand and may eventually spread into the lungs or other organs.

The platinum based chemotherapeutic drug cisplatin is one of the most widely used treatments for mesothelioma. Like many chemotherapy medications, it is delivered by infusion. But the Scottish team believes there are distinct advantages to inhaling cisplatin through a nebulizer instead, especially for patients in fragile health or those who may not be candidates for mesothelioma surgery.

“By delivering Cisplatin…in a vaporized form, we would be able to get it to the cancerous cells and avoid the damage to healthy cells which can be hugely debilitating to patients,” says research team leader Dr. Chris Carter, Senior Lecturer with the Institute of Pharmacy and Biomedical Science in Strathclyde. “It would make the treatment far less onerous for them and we hope it would help them to live longer.”

In addition to delivering medications in a targeted area, Dr. Carter says the nebulizer system also allows for faster drug delivery and, potentially, faster results against mesothelioma.  According to a press release, the team expects that the nebulizer delivery system will soon be ready for human clinical trials.

At the same time, researchers elsewhere in Scotland and in Australia have designed an iron core for cisplatin that would allow it to be dragged, using magnets, to a targeted treatment area. Like the nebulizer delivery system, the goal is to reduce side effects by concentrating the drug in the area where it is most needed.

Researchers in Iran tested the safety of a new version of the drug pemetrexed in patients with non-small cell lung cancer and malignant pleural mesothelioma. This drug is used to treat these patients when they are not able to get surgery for their cancer. The researchers were able to determine that pemetrexed is safe in patients with non-squamous non-small cell lung cancer. Treatment Choices Malignant pleural mesothelioma is a lung-related cancer like non-small cell lung cancer. It is caused by exposure to asbestos. Treatment for mesothelioma usually involves chemotherapy, radiation therapy, and surgery. Patients may receive more than one type of treatment. This is called multimodal therapy. Pemetrexed is a chemotherapy drug that interrupts the cell replication process that helps … END_OF_DOCUMENT_TOKEN_TO_BE_REPLACED