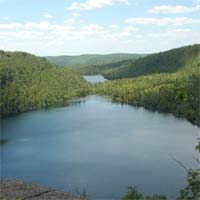 People who live in Minnesota’s Iron Range and have contracted malignant mesothelioma may finally get some explanation as to how it happened. Mesothelioma is an aggressive cancer that attacks internal body membranes. It is almost always associated with exposure to the mineral asbestos. But, in the Iron Range, where the mesothelioma rate has been found to be 300 times higher than the rest of the state, the primary mineral is taconite, which is mined for its iron content.

Alarmed by the unusually high rate of mesothelioma among taconite miners, the Minnesota Department of Health launched a study of iron range workers in conjunction with the University of Minnesota.  The Taconite Workers Health Study, which started in 2008, is focused on the nearly 50,000 people born since 1920 who worked in Minnesota’s taconite industry. Final results of the 5-year study are set to be released at a meeting on April 12th.

Preliminary study results released in 2012 suggested that, although the incidence of mesothelioma is clearly higher in this population, the exact cause may never be known. Asbestos insulation is used in taconite mining equipment but air quality tests at the six mines showed no significant asbestos dust. Because mesothelioma can develop decades after exposure, some have theorized that taconite workers with mesothelioma may have been exposed to asbestos in other jobs earlier in life. Others believe that taconite itself may be the culprit since, like asbestos, it contains high levels of toxic iron.

Mesothelioma is a highly aggressive cancer where conventional therapies are not curative and claims the lives of an estimated 2,500 people in the U.S. each year. An estimated 1,681 taconite workers born since 1920 were found to have developed mesothelioma or another form of lung cancer. As of the latest figures, 82 people had died of mesothelioma on the Iron Range since 2010.