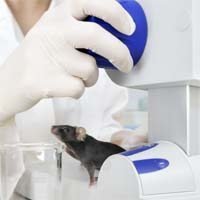 A drug that has been shown to slow the growth of renal cell carcinoma may have moved a step closer to becoming a viable addition to the arsenal of patients fighting malignant mesothelioma.

Temsirolimus is a kinase inhibitor that appears to work against mesothelioma, in part, by blocking the action of a protein that tells cancer cells to replicate. In laboratory tests on isolated tumor cells, temsirolimus effectively blocked the gene pathway known as mammalian target of rapamycin (mTOR) that is responsible for signaling the growth and division of all types of mesothelioma.

Now, a new study conducted by scientists in Greece and the UK suggests that the compound may do the same thing in living patients. The doctors induced two kinds of mesothelioma in mice. The mice were then given 20 mg/kg of temsirolimus five times a week by injection into the pleural space around the lungs where mesothelioma grows.

When the mice were sacrificed and autopsied a few weeks later, the temsirolimus was found to have had several important cancer-fighting effects on them. Not only did the drug inhibit mesothelioma cell proliferation by halting the formation of tumor-feeding blood vessels (known as angiogenesis), but it also stimulated the production of cancer-fighting immune cells and prompted mesothelioma cells to die early in a process called apoptosis. In one type of mesothelioma, temsirolimus even reduced the buildup of fluid around the lungs of the infected mice.

The study is the first to demonstrate the impact of temsirolimus on the immune system’s response to mesothelioma and on the process of vascularization necessary for the growth of mesothelioma tumors. A 2013 study in the journal Oncology Reports suggested that temsirolimus may also enhance the effectiveness of certain chemotherapy drugs for mesothelioma.