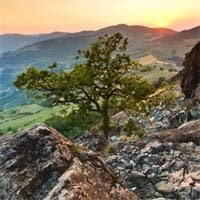 People who live close to ancient rock formations called ophiolites are at higher risk of mesotheliomaand other asbestos-related diseases.

That is the conclusion reached by a team of researchers in the thoracic surgery department of a Turkish hospital. In a report published in the medical journal Respiratory Medicine, the team explained the findings of a study of 2,970 volunteers living near Turkish ophiolite formations.

Ophiolites get their name from the words “snake stone” in Greek. They appear to be pieces of ancient ocean floor that have been pushed to the surface over time and are rich in asbestos and other types of rock and minerals. Approximately 85% of the world’s asbestos, a mineral closely-linked to mesothelioma and a range of other health problems, comes from ophiolite sites.

Ophiolites typically occur in mountain belts and may be mined for asbestos (used in concrete and other products), or cut into large stones for building or decoration. While ophiolite formations are more common in Europe and the Mediterranean, they also exist in New York state, as well as northern and central California, Oregon, Washington and Arizona.

In their study of people who live less than 10 kilometers from an ophiolite site, the researchers found that 9.8% had some sort of asbestos-related disease. Three people had developed malignant mesothelioma and 289 had pleural plaques, a scarring of the lung tissue that can inhibit breathing over time. The risk increased by 12% for every kilometer a person lived closer to the ophiolite site and 5% for ever year of age. Older men and people with a low body mass index (BMI) were at highest risk.

Normally, mesothelioma is a rare cancer, striking an estimated 2,500 Americans each year. While most mesothelioma comes from occupational exposure to asbestos, other studies have confirmed that just living close to the site of asbestos can dramatically increase the risk.

Dongel, I et al, “Is living close to ophiolites related to asbestos related diseases? Cross-sectional study”, April 9, 2013, Respiratory Medicine, Epub ahead of print.
Alden, Andrew, “What is an Ophiolite?”, from About.com/Geology.

New research suggests that the two major types of pleural mesothelioma surgery have about the same impact on patients’ quality of life afterward.  Thoracic surgeons at Switzerland’s University Hospital Zurich compared the results of 42 mesothelioma patients. Patients had either extrapleural pneumonectomy (EPP) or lung-sparing PD surgery between 2013 and 2017.  Patients answered questions about their health in the weeks and months after pleural mesothelioma surgery. Their answers show that, where post-surgical quality of life is concerned, it may not matter which procedure a person has.  Two Approaches to Pleural Mesothelioma Surgery Pleural mesothelioma tumors start on the membranous tissue (pleura) that surrounds the lungs. A healthy pleura is thin and flexible and expands to accommodate the lungs during respiration. … END_OF_DOCUMENT_TOKEN_TO_BE_REPLACED