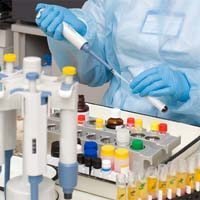 Two separate teams of Japanese researchers are delving into the possibilities of blood serum indicators that could help predict outcomes in patients with malignant pleural mesothelioma.

Mesothelioma is a rare but aggressive cancer caused by exposure to asbestos. Pleural mesothelioma, a cancer that starts on the lining around the lungs, is the most common form of the disease. It occurs most often in people who have inadvertently inhaled asbestos dust. Mesothelioma is highly resistant to conventional treatments. It is also difficult to predict which patients are likely to do well with standard therapies and which are not, which is referred to as prognosis.

But researchers worldwide are continually searching for new ways to diagnose and predict the prognosis of patients with mesothelioma. Scientists at Juntendo University in Tokyo are investigating the prognostic value of a chemical that is already being used to help monitor the success of chemotherapy treatment for pleural mesothelioma. N-ERC/mesothelin is a soluble protein produced by cells and released into the blood serum. It is known to be a biomarker for mesothelioma.

To test the value of N-ERC for determining prognosis, the researchers enrolled 26 patients with malignant pleural mesothelioma. Serum levels of N-ERC were measured before and after two courses of chemotherapy. They found that the median N-ERC level was much lower in the group that experienced a partial response to treatment than it was in patients whose mesothelioma remained stable or progressed. Overall survival was highest in the group with the lowest median N-ERC index. The researchers say this could make N-ERC a valuable way to know up front which patients are likely to experience good results with chemotherapy.

Another team of researchers is examining the value of HMGB1 (high-mobility group protein B1), a chromatin protein found in the nuclei of cells. It has been linked with the development of lung fibroblasts, cells similar to those that give rise to mesothelioma. Serum HMGB1 levels were measured in 61 malignant pleural mesothelioma patients, as well as 45 people who had benign asbestos-related diseases.

In two of the four mesothelioma cell lines tested, HMGB1 levels were higher than that of normal cells. The team also found that the mesothelioma patients had “significantly higher” serum level of HMGB1 than people who had been exposed to asbestos but had not developed mesothelioma. The difference in overall survival between the highest and lowest HMGB1 groups was deemed significant. “Our data suggest that serum HMGB1 concentration is a useful prognostic factor for malignant pleural mesothelioma,” report the researchers. A summary of their findings appears in a recent issue of BMC Cancer.

The MESOMICS project is the most comprehensive dataset of mesothelioma genomics to date. The data in this resource can help researchers to design precision treatments for mesothelioma patients This project was created by an international collaboration between scientists from France, Chile, and the United States. Understanding Diagnosis Malignant pleural mesothelioma is a rare cancer caused by asbestos exposure. There are approximately 2,000 cases of mesothelioma diagnosed in the United States alone every year. Because it is so rare, the treatment options are very limited compared to other types of cancer. The limited treatment options combined with the cancer’s ability to spread without being noticed makes mesothelioma a deadly disease. Median overall survival for mesothelioma patients is a little over a … END_OF_DOCUMENT_TOKEN_TO_BE_REPLACED