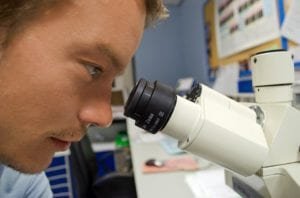 Australian researchers say proteins found in lung fluid could hold the key to diagnosing pleural mesothelioma months or even years before a tumor is visible on imaging scans.

Proteins function as communication devices in the body, directing all sorts of critical cellular processes, including the processes that tell cancer cells to begin replicating at a higher rate than normal cells.

Scientists at Flinders University, one of the world’s leaders in mesothelioma research, wondered if the proteins that help give rise to malignant pleural mesothelioma could be found in pleural effusions and used as biomarkers to identify the cancer earlier.

In a new study published in the Journal of Proteomics, the team notes that the incidence of mesothelioma is still increasing in many Western countries (including Australia) even though several of them have instituted asbestos bans.* This is largely because of mesothelioma’s long latency period which can sometimes be decades after initial asbestos exposure.

One of the reasons that asbestos cancer is so deadly is that it is usually not identified until it is in an advanced stage, making it less likely to respond to treatment. Many newly-diagnosed mesothelioma patients are told they have only months to live.

Although there are few early mesothelioma symptoms, patients often develop fluid around the lungs months or years before a detectable tumor appears. This is true for several other types of cancer, too, including lung cancer.

By examining the “proteome” or protein profile of this fluid in patients with malignant pleural mesothelioma, lung cancer, and benign conditions, the Flinders researchers hoped to find a biomarker for early mesothelioma diagnosis.

Proteins That May Play a Role in Mesothelioma Development

“We identified several proteins that may be possible targets and warrant further investigation,” writes lead study author Reuben White of the Department of Anatomical Pathology at Flinders.

Among the key proteins upregulated in the mesothelioma patients were S100 proteins and cytokeratin 5/6. In addition, the researchers concluded that serum amyloid protein-2 “may have a role in prognosis and diagnosis of mesothelioma.”

One of the proteins that got special attention from the team is a signal protein called vascular endothelial growth factor (VEGF). VEGF is known to stimulate the growth of cancer cells and has been found to be upregulated in the lung fluid of people with mesothelioma.

White and his team report, “Due to the predominance of up regulated proteins involved in VEGF signalling in MPM, we analysed VEGFA levels in effusions and found a strong correlation between VEGFA levels and survival in MPM.”

In the study, mesothelioma patients whose proteome included elevated levels of this particular protein did not live as long as those with lower levels.

The next step will be to conduct further studies on the proteins identified in the Flinders research in order to confirm their value as potential mesothelioma biomarkers.

* The US has not banned asbestos, but regulates its use through the EPA.

A new study shows that a multifaceted approach to quitting smoking can help patients diagnosed with cancer. One rare type of cancer is mesothelioma. This cancer is caused by exposure to asbestos. It occurs in the lining of different parts of your body, usually in the abdomen or the lungs. Mesothelioma often takes decades to develop after being exposed to asbestos. The symptoms can be hard to diagnose because they look like other, more common diseases. This makes treating mesothelioma more difficult, too. The cancer has more time to spread while doctors are struggling to make a diagnosis. There are other factors that make cancers like mesothelioma difficult to treat. Smoking after a cancer diagnosis can lead to worse survival … END_OF_DOCUMENT_TOKEN_TO_BE_REPLACED