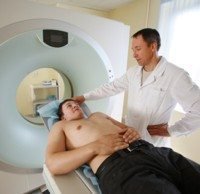 Using computed tomography scans to screen former asbestos workers can detect both early and late-stage lung cancer and late-stage mesothelioma, according to a study in the May Journal of Thoracic Oncology. However, it’s still not clear whether screening for these cancers might improve patients’ prognoses.

Exposure to asbestos fibers is a known risk factor for lung cancer and the cause of mesothelioma. Although asbestos is still not completely banned in the U.S., it was phased out of American industry to a large degree beginning in the 1970s.  However because asbestos-related diseases can take 20 to 40 years to emerge after people have been exposed, former asbestos workers and those exposed to products containing this carcinogen continue to be diagnosed with asbestos caused cancers.

As researchers search for better treatments and even a cure for these diseases, they are also focusing on new diagnostic methods that might identify the cancers earlier. Early diagnosis is particularly crucial with mesothelioma, because many patients survive only one year after they first start to show signs, and symptoms are often difficult to distinguish from those of other lung diseases.

One potential screening method uses low-dose computed tomography (LDCT) to evaluate the lungs and their lining (pleura). LDCT can locate plaques in the lungs, which are a sign of asbestos exposure and have been linked to an increased cancer risk.

Currently, there are no recommendations about using LDCT or any other method to screen people who have been exposed to asbestos, and screening isn’t routinely done. “There are currently no methods for the early detection of mesothelioma available,” says lead author Heidi Roberts, MD, Associate Professor of Radiology at the University of Toronto.  “This is why we are doing the research.”

To determine the effectiveness of LDCT as a screening tool for asbestos-related lung cancers, Dr. Roberts and her colleagues recruited 516 people (most of them men) who had been exposed to asbestos at least 20 years before, or who had known plaques. Participants were given LDCT scans of the chest. Patients who had abnormal scans were given follow-up tests. Those with normal test results were invited to have an annual LDCT scan.

Although LDCT was able to detect advanced mesothelioma, as well as early- and late-stage lung cancers, it was not able to diagnose early mesothelioma. The study authors say they need to continue screening patients to help them get a better idea of what early mesothelioma looks like. Also, they say adding biomarkers (substances in the blood that indicate the presence of cancer) to the screening process may provide greater sensitivity to help diagnose those at very high risk for mesothelioma.

Even as techniques are fine-tuned, screening is just one step of a three-tiered effort to combat these cancers, according to Dr. Roberts. “The second step is the parallel development of biomarkers, and the third step is the parallel development of treatment strategies,” she says. “These have to be developed hand-in-hand in order to make this a useful and meaningful tool.”

Researchers in Iran tested the safety of a new version of the drug pemetrexed in patients with non-small cell lung cancer and malignant pleural mesothelioma. This drug is used to treat these patients when they are not able to get surgery for their cancer. The researchers were able to determine that pemetrexed is safe in patients with non-squamous non-small cell lung cancer. Treatment Choices Malignant pleural mesothelioma is a lung-related cancer like non-small cell lung cancer. It is caused by exposure to asbestos. Treatment for mesothelioma usually involves chemotherapy, radiation therapy, and surgery. Patients may receive more than one type of treatment. This is called multimodal therapy. Pemetrexed is a chemotherapy drug that interrupts the cell replication process that helps … END_OF_DOCUMENT_TOKEN_TO_BE_REPLACED