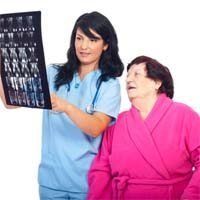 Mesothelioma, also known as ‘asbestos cancer’ attacks the membrane that surrounds the lungs and other organs. Patients with pleural mesothelioma gradually lose breathing capacity as the pleural membrane stiffens and fluid buildup inhibits the ability of the lungs to expand. Most patients diagnosed with the disease will be treated with chemotherapy as part of a multi-modality treatment approach. Cisplatin and pemetrexed (Alimta) are the most commonly used chemo drugs used in the U.S. to treat mesothelioma.

But a recent French study suggests that mesothelioma patients may benefit from a second, third, or even fourth round of chemotherapy as their disease progresses. The authors of the study reviewed the records of 84 patients whose mesothelioma progressed after they received pemetrexed-based chemotherapy. Forty-four of them – 30 men and 14 women with a median age of 58 – received second line chemotherapy (SLC). Most of the patients who were treated a second time had a good performance status (a measure of general well-being) and had the epithelial histological subtype of mesothelioma. For most, it had been about six months since their first round of chemotherapy.

Of the mesothelioma patients who were treated, 21 received the standard pemetrexed-based chemotherapy combination and the rest received a newer type of drug mixture. The research team reports that about a quarter of patients had a measurable response to the second line chemotherapy. The authors observed “According to the Recist criteria, a partial response was observed in four patients and the disease was stabilized in six patients after SLC. The median time to progression after SLC was 3.8 months.”

The media survival for these mesothelioma patients was 12.2 months after their second round of chemotherapy. Four of them also went on to receive a third round and two received chemotherapy four times. The French researchers say the study indicates the feasibility of administering SLC in patients who are otherwise healthy when their mesothelioma progresses. They note that no optimal treatment or dosage amount has been established for these patients and they urge further study on the issue.

Mesothelioma is rare but increasingly common around the world. It affects approximately 3,000 Americans annually, most of whom were exposed to asbestos 10 to 40 years ago. While these study results are encouraging, they underscore the fact that chemo is seldom a cure for mesothelioma and that other more innovative approaches are desperately needed.

A new study published in Thoracic Cancer discussed the impact of COVID‐19 pandemic on new mesothelioma diagnoses in Italy. Malignant mesothelioma is a rare disease of great interest to the scientific community and to public health. This is due to its high lethality and its association with asbestos exposure. The timely diagnosis of mesothelioma is important. Although it may not change the prognosis of the disease, it can help in treatment strategies. It can also help in documenting previous exposure to asbestos. This can contribute to any request for compensation. New Study Shows Promising Results During the COVID-19 pandemic, there was a delay in the diagnosis of oncological diseases. This was because many departments were converted into COVID wards. And … END_OF_DOCUMENT_TOKEN_TO_BE_REPLACED