Home / News / Mesothelioma Prognosis: Some Markers More Useful than Others 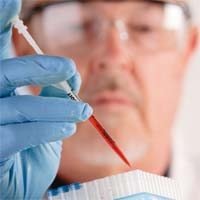 Deciding which treatments to try and determining whether they are working are two of the biggest challenges for patients with malignant pleural mesothelioma.  But a team of researchers in the UK is trying to make the process a little easier. They have identified three markers the say can help doctors predict prognosis in mesothelioma patients and monitor their response to treatment.

Before treatment began, the researchers used PET-CT to test each patient’s baseline total glycolytic volume (TGV), a measure of metabolic activity within the mesothelioma tumor.  They also measured several serum markers including mesothelin, fibulin-3, and neutrophil-to-lymphocyte ratio. Patients were followed for a minimum of one year. Median survival in the chemotherapy group was 368 days and in the best-supportive care group it was 325.

The study results suggest that neutrophil-to-lymphocyte ratio (a measure of immune response) and baseline TGV may be the best predictors of overall survival in patients with mesothelioma. A baseline neutrophil-to-lymphocyte ratio (NLR) of less than 4 was “an independent predictor of better overall survival” and increased survival by a median of about 200 days over patients with a higher NLR.

But not all of the prognostic factors tested were valuable for the same things. Mesothelin, for example, turned out not be a good predictor of overall survival but was valuable for monitoring treatment response. Patients whose mesothelin levels fell at 8 weeks, regardless of what the initial level was, were more likely to have a longer time before their mesothelioma progressed. And while baseline TGV (measured by PET-CT) was valuable for predicting survival, it turned out not to be useful for monitoring chemotherapy response.

“There appears to be no role for routine interval PET-CT scanning in patients undergoing chemotherapy,” writes lead author Dr. Claire Hooper of the North Bristol Lung Centre. “However, change in serum mesothelin could be an indicator of treatment response and warrants further study.”

The article appears in a recent issue of the British Journal of Cancer.

Researchers in Iran tested the safety of a new version of the drug pemetrexed in patients with non-small cell lung cancer and malignant pleural mesothelioma. This drug is used to treat these patients when they are not able to get surgery for their cancer. The researchers were able to determine that pemetrexed is safe in patients with non-squamous non-small cell lung cancer. Treatment Choices Malignant pleural mesothelioma is a lung-related cancer like non-small cell lung cancer. It is caused by exposure to asbestos. Treatment for mesothelioma usually involves chemotherapy, radiation therapy, and surgery. Patients may receive more than one type of treatment. This is called multimodal therapy. Pemetrexed is a chemotherapy drug that interrupts the cell replication process that helps … END_OF_DOCUMENT_TOKEN_TO_BE_REPLACED