Home / News / Mesothelioma Researcher to Be Honored for Service to Society 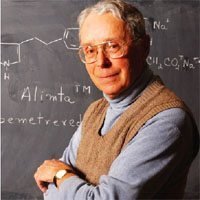 A researcher whose work led to the development of the only drug approved specifically for the treatment of mesothelioma is being honored by the National Academy of Sciences.

The NAS has announced that it will honor Edward C. Taylor, the A. Barton Hepburn Professor of Organic Chemistry Emeritus at Princeton University with the Chemistry in Service to Society award. Taylor’s contributions to a branch of chemistry known as heterocyclic chemistry helped lead to the development of the new-generation antifolate, pemetrexed (brand name Alimta). Pemetrexed is FDA-approved for the treatment of mesothelioma and non-small cell lung cancer but is also in clinical trials for a number of other types of cancer.

Pemetrexed was first approved for mesothelioma in February 2004, the first drug approved to treat this rare but intractable cancer. It was approved for lung cancer in 2008. Developed by Dr. Taylor and clinically developed by Eli Lilly, pemetrexed is still considered a gold standard chemotherapy treatment for mesothelioma, a cancer of the membrane that surrounds the lungs and other internal organs. Mesothelioma is a rare disease associated with asbestos exposure that claims the lives of about 2,500 Americans each year.

Pemetrexed is a folate antimetabolite that works by inhibiting certain key enzymes and preventing the formation of DNA and RNA critical for mesothelioma cells to function and replicate. In the treatment of mesothelioma, pemetrexed is most-often combined with the platinum-based agents,  cisplatin or carboplatin.

While it has been hailed as an important mesothelioma drug, pemetrexed is usually not curative and may also cause serious side effects including low white blood cell counts, low blood platelets, anemia, fatigue and nausea. The addition of folic acid and B12 supplementation during pemetrexed therapy for mesothelioma has been shown to reduce these side effects.  In addition, pemetrexed is not effective in all mesothelioma patients.  A 2011 University of Chicago study found that genes may influence sensitivity to pemetrexed.

Dr. Taylor will receive the NAS award along with a $20,000 prize at the Academy’s 150th annual meeting in April.

The MESOMICS project is the most comprehensive dataset of mesothelioma genomics to date. The data in this resource can help researchers to design precision treatments for mesothelioma patients This project was created by an international collaboration between scientists from France, Chile, and the United States. Understanding Diagnosis Malignant pleural mesothelioma is a rare cancer caused by asbestos exposure. There are approximately 2,000 cases of mesothelioma diagnosed in the United States alone every year. Because it is so rare, the treatment options are very limited compared to other types of cancer. The limited treatment options combined with the cancer’s ability to spread without being noticed makes mesothelioma a deadly disease. Median overall survival for mesothelioma patients is a little over a … END_OF_DOCUMENT_TOKEN_TO_BE_REPLACED