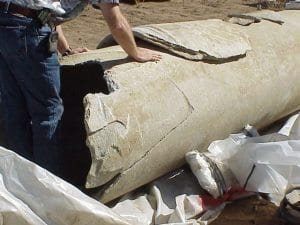 As pipes containing asbestos break down over time and need repair, there is concern that improper handling could release the toxic fibers into the environment, posing a mesothelioma risk for workers and residents. It is even possible for asbestos to wind up in drinking water.

Mesothelioma is an aggressive cancer of internal membranes caused by either inhaling or ingesting fibers of asbestos. Although some asbestos occurs naturally in the environment, most people who contract mesothelioma are exposed to asbestos in products that were made from it.

One of those products is asbestos cement, a strong and corrosion-resistant mixture that was used for decades in the U.S. and around the world to make a wide range of products, including water pipes. The Asbestos Diseases Awareness Organization estimates that the U.S. installed millions of miles of asbestos cement pipes between the 1960s and the 1980s, many of which are now reaching the end of their 50 to 70 year lifespan.

For most of their lifetime, these pipes may pose no health threat at all. But when they begin to deteriorate and the asbestos fibers in them loosen or become “friable”, there is a potential mesothelioma risk for anyone who has to repair or replace them and even for those who drink water that passes through them.

The Occupational Safety and Health Administration has established strict guidelines for the handling of asbestos cement by workers in an effort to minimize mesothelioma risk, but a 2011 incident in Houston proves these guidelines are not always followed. In that case, workers were charged with repairing a water main made of 35% asbestos without being given warning, training or protective gear.

But deteriorating asbestos water pipes may pose a threat even when they are not being worked on. According to the Environmental Protection Agency (EPA), along with erosion of natural asbestos deposits, decay of asbestos cement water mains is the biggest source of mesothelioma-causing asbestos in drinking water.  As part of the Safe Drinking Water Act, the EPA has set a maximum contaminant level of 7 million asbestos fibers per liter of water. Water suppliers who go above this level are required to alert customers and provide alternate water sources, but they have as long as 30 days after the occurrence to do so.

Thankfully, asbestos is no longer being used to make water pipes in the U.S. but, according to The Environmental Consultancy, an environmental consulting firm, over 95 percent of the chrysotile asbestos fiber mined worldwide is still being mixed with cement to create roofing, siding, water pipes and other products that are used in other countries.

A Canadian study found that tracking trends in mesothelioma at the local level can help officials predict future mesothelioma cases. Most mesothelioma tracking efforts focus on the national scale and monitor cases across a country or region. This study, published in Cancer Causes and Control, looked at mesothelioma cases based on industrial sources of asbestos in Ontario and British Columbia. Growing Number of Cases Asbestos is a toxic material that is used in many commercial and industrial products. It’s durability and heat resistance made it very popular in products like construction materials, textiles, and vehicles. Mesothelioma is a deadly cancer caused by exposure to asbestos. It was first identified as a cancer-causing material in 1977 by the International Agency for … END_OF_DOCUMENT_TOKEN_TO_BE_REPLACED