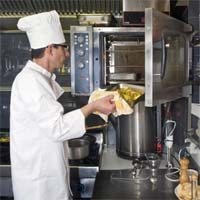 Although asbestos was most common in industrial settings like ship yards and manufacturing plants, recent headlines drive home the fact that the mineral which causes mesothelioma can still be found in some unexpected places – including restaurants, retail stores and even hospitals.

A 60-year-old chef from Salisbury, England reportedly contracted malignant mesothelioma after years of working around a restaurant oven with asbestos seals on its doors.  A naturally occurring mineral, asbestos is resistant to heat and fire, which once made it a popular insulator. But in his case against the pizza restaurant where he worked for years, Luigi Pes alleged that he had inadvertently inhaled asbestos dust from years of opening and closing the oven. Pes was diagnosed with mesothelioma in 2008. He claims that he was unaware of the asbestos oven seals or that asbestos is the only known cause of mesothelioma.

Also in the UK, one of Britain’s biggest retailers, Marks and Spencer plc, and two contractor firms have been convicted of exposing people to asbestos-containing materials during reconstruction projects in 2006 and 2007 at a store in Reading. The Health and Safety Executive prosecuted the three companies, claiming they failed to take required precautions.  Although they were never aware of the dangers, Marks and Spencer shoppers, employees, and even people just passing by, may have been exposed to asbestos and put at risk for mesothelioma and other health problems. According to the US Environmental Protection Agency, there is no safe level of asbestos exposure, although the risk of developing mesothelioma is higher with greater exposure.  Marks and Spencer will be sentenced for their asbestos violations in September.

And in the U.S., a New York City hospital has been cited by the Occupational Safety and Health Administration (OSHA) for life-threatening asbestos violations.  OSHA inspectors say the Interfaith Medical Center in Brooklyn failed to provide proper asbestos training for staffers involved in demolition and renovation projects.  Materials such as floor and ceiling tiles containing asbestos were thrown away in hospital dumpsters, potentially putting workers, neighbors, and even patients at risk for inhalation diseases like mesothelioma.  The hospital received 14 citations, 10 of which were deemed “serious”, and was fined $48,000.

Approximately 2,500 Americans are diagnosed with mesothelioma each year.  Many patients were unaware that they were being exposed to asbestos at the time the exposure occurred.

Malignant pleural mesothelioma is a rare type of cancer. A growing number of mesotheliomas are being treated with novel immunotherapies. But clinicians still lack a meaningful way to measure mesothelioma treatment response. An article in Seminars in Nuclear Medicine lists five ways clinicians can measure how well a treatment plan is working. And a new artificial intelligence tool can measure mesothelioma tumors without any human input. Artificial intelligence may provide the key to treatment response in the future. Measuring Mesothelioma Treatment Response In malignant pleural mesothelioma, complex tumors result in inconsistent clinical assessment. There are five common ways to measure if a treatment plan is working. Generally, a clinician will look to see if the size or weight of a tumor has … END_OF_DOCUMENT_TOKEN_TO_BE_REPLACED