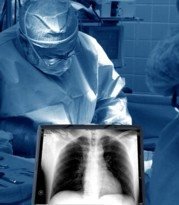 Delivering a high dose of heated chemotherapy directly into the chest and abdomen during mesothelioma surgery improves patients’ survival without compromising their safety, according to a recent study published in The Journal of Thoracic and Cardiovascular Surgery. The researchers say their results provide real evidence that adding chemotherapy or other drugs to surgery could improve the outcome for mesothelioma patients, particularly those with early-stage cancers.

“The exciting thing about this is that a new platform for therapy has been established,” says lead author David J. Sugarbaker, MD, Chief of Thoracic Surgery at Brigham and Women’s Hospital, and Professor of Surgery at Harvard Medical School.

Any potentially effective therapy is good news to mesothelioma researchers, because this cancer has traditionally been very difficult to treat. Often, treatment involves a technique called extrapleural pneumonectomy (EPP), in which surgeons remove a lung and its lining, the diaphragm, and the membrane surrounding the heart, yet the challenge has been in removing all of the cancer. Often, a few mesotheloma cells are left behind in the abdomen or chest after surgery, and these cells can eventually spread and lead to a recurrence.

One way to target these mesothelioma remnants is by administering chemotherapy directly into the abdomen and/or chest during EPP surgery. In the current study, surgeons used heated chemotherapy rather than traditional chemotherapy, because heat has been shown to enhance the potency of the treatment, according to Dr. Sugarbaker.

The study treated 92 mesothelioma patients with EPP and a high dose of the heated chemotherapy drug, cisplatin, delivered directly into the chest and abdomen. Because cisplatin can be toxic to the kidneys, patients were also given medications to protect their kidneys. Participants were followed up regularly after their surgery to see whether their cancer had returned.

The mesothelioma did eventually return in 51% of participants. In all, 4.3% of the treated patients died post-operatively, which the authors say is similar to the mortality rates with EPP surgery alone. Nearly 49% of patients experienced complications after the surgery. Although most of these complications were related to the kidneys, the drugs patients were given to protect their kidneys did seem to have some protective benefit.

Overall median survival was slightly greater in the mesothelioma patients who underwent heated chemotherapy therapy—13.1 months compared to 11.0 months in patients who did not undergo this treatment regimen. The authors say that these results are encouraging, especially considering that most of the patients in the study had at least stage III cancer, and early-stage cancer patients tend to benefit most from treatment. (Patients with stage I and II cancers in this study survived an average of 21 months.) “I think that the place where heated intraoperative chemotherapy will have the greatest impact will be on patients with the earliest stage disease at the time of chemotherapy,” Dr. Sugarbaker says.

One day, doctors may be able to predict which patients will be most likely to benefit from heated chemotherapy and similar treatments by analyzing differences in genes expressed by their cancer. “Eventually I think we’re going to be able to genetically determine from a biopsy of the tumor which patients should get which drugs,” Dr. Sugarbaker says.

Researchers in Iran tested the safety of a new version of the drug pemetrexed in patients with non-small cell lung cancer and malignant pleural mesothelioma. This drug is used to treat these patients when they are not able to get surgery for their cancer. The researchers were able to determine that pemetrexed is safe in patients with non-squamous non-small cell lung cancer. Treatment Choices Malignant pleural mesothelioma is a lung-related cancer like non-small cell lung cancer. It is caused by exposure to asbestos. Treatment for mesothelioma usually involves chemotherapy, radiation therapy, and surgery. Patients may receive more than one type of treatment. This is called multimodal therapy. Pemetrexed is a chemotherapy drug that interrupts the cell replication process that helps … END_OF_DOCUMENT_TOKEN_TO_BE_REPLACED