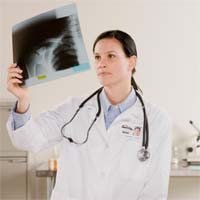 Open radical lung-preserving surgery appears to offer a significant survival advantage over non-radical, palliative surgery in patients with malignant pleural mesothelioma. That is the finding of a new study published in the European Journal of Cardiothoracic Surgery.

Pleural mesothelioma is caused by inhaling asbestos fibers, which irritate the delicate lung tissue, leading to chronic inflammation and, sometimes, malignancy. Lung-preserving (or debulking) surgery for mesothelioma falls into two categories: radical, an invasive procedure during which affected lung tissue is removed, and non-radical, which is aimed at releasing the contracture in the mesothelium surrounding the lungs to allow for more comfortable breathing.

Researchers from Nottingham, England compared the outcomes of 13 mesothelioma patients who had had the more invasive radical decortication with 13 other patients who had had palliative surgery or non-radical decortication. Both sets of patients were matched for age, sex, histology, stage of their cancer (as determined by CT scan), hematological indices, and body mass index. Both sets of patients also received chemotherapy after their surgery and many also received radiation.

The study found a median survival rate of 16.9 months in the group of mesothelioma patients who had radical decortication, compared to just 6.8 months in the non-radical surgical group. According to the researchers “Radical open-lung-sparing surgery may confer a survival advantage to patients with malignant mesothelioma, who are fit to undergo radical decortication followed by chemotherapy and radiotherapy. Trials of radical surgery versus no surgery should include lung-sparing operations.”

The research confirms the findings of a 2008 French study presented at the Annual Meeting of the Society of Thoracic Surgeons. After reviewing 102 cases of patients with stage 3 mesothelioma, the French team found that 83 percent of the patients who had had radical decortication were still alive at 1 year. Seventy-three percent were still alive at two years. Those rates were significantly better than the survival rates of patients who’d had non-radical decortication to expand their breathing capacity.

Shahin, Y. “How successful is lung-preserving radical surgery in the mesothelioma and radical surgery-trial environment? A case-controlled analysis”, European Journal of Cardiothoracic Surgery, 2010 Aug 7: ePub ahead of print. Nakas, A. “Open lung-sparing surgery for malignant pleural mesothelioma: the benefits of a radical approach within multimodality therapy”, European Journal of Cardiothoracic Surgery. 2008 Oct;34(4):886-91.