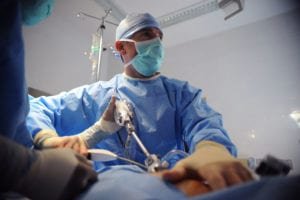 A new study out of Spain suggests that it might be possible to perform the surgery that has become the standard of care for peritoneal mesothelioma in a much less invasive way.

Now, researchers at the University Hospital Reina Sofia in Cordoba, Spain say they have successfully performed this extensive multi-part procedure through tiny incisions using an internal camera for guidance.

After treating eight abdominal cancer patients this way—including two with a benign form of peritoneal mesothelioma—the research team concludes that this minimally invasive mesothelioma surgery approach is “feasible and safe” in the right patients.

The CRS/HIPEC approach to peritoneal mesothelioma surgery involves removing the diseased peritoneal membrane which encases the abdominal organs, as well as other tissue in the abdomen that could be at high risk for hosting mesothelioma tumors.

It is traditionally performed by making a long abdominal midline incision (a median laparotomy). After the surgeon explores the abdomen for tumors, the tumors and peritoneal lining are resected, and a rinse of heated chemotherapy drugs is applied in an attempt to kill any residual mesothelioma cells.

Although people with peritoneal mesothelioma used to have a very poor prognosis with a median survival of just 9 to 14 months, more than two-thirds of CRS/HIPEC patients are still alive five years after the surgery.

Open CRS/HIPEC is a major surgery, often lasting 4 to 10 hours and requiring at least six weeks of recovery.

For these patients, laparoscopic CRS/HIPEC may offer an alternative. The new data presented in the World Journal of Surgery suggests that, not only is this approach not as physically traumatic as open surgery, but may also be a little shorter and require a shorter recovery period.

According to the Spanish team, none of the eight laparoscopic CRS/HIPEC procedures they performed took longer than 6 hours (the median was just under 5) and the longest any patient was in the hospital was 5 days. There were also no significant complications. Just as importantly, after a median follow-up of 9.5 months, none of the patients treated this way have relapsed.

Other potential advantages of laparoscopic versus open procedures for mesothelioma patients are lower risk of bleeding and infections and less pain.

“The results suggest that this minimally invasive approach for CRS and HIPEC is feasible and safe in a highly selected group of patients with peritoneal surface malignancies,” concludes the report.

But the Spanish team is not the first to test laparoscopic CRS/HIPEC for peritoneal cancer. As noted by other researchers, one potential drawback of the procedure is that, if the patient is found to have large or widespread tumors, the laparoscopic approach may limit the surgeon’s ability to see and remove them completely.