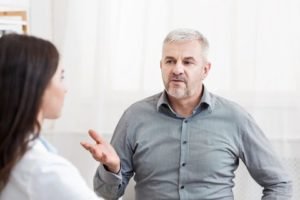 This has been the preferred way to treat pleural mesothelioma for many years. But most of the studies on it are retrospective. This means that researchers analyze data on mesothelioma patients who already had treatment. In many cases, they are patients who have died.

The new study is one of the few prospective studies on neoadjuvant chemotherapy and mesothelioma surgery.  In a prospective study, researchers enroll patients and follow their progress through treatment.

Pleural mesothelioma is often fatal within a few months. But ninety-five percent of the study subjects who had presurgical chemotherapy followed by an operation were still alive a year later.

The Challenge of Treating Pleural Mesothelioma

Pleural mesothelioma is an extremely rare cancer caused by exposure to asbestos. It affects the membranes around the lungs and can spread to the lungs and elsewhere in the chest. Even with the best treatments, most people with a mesothelioma diagnosis face a poor prognosis.

The good news is that the odds are improving as scientists understand the disease better. In 2004, the FDA approved the first-ever drug therapy for pleural mesothelioma. Alimta (pemetrexed) is still the gold standard systemic treatment for both adjuvant and neoadjuvant chemotherapy. Doctors usually combine it with a platinum drug called cisplatin.

Neoadjuvant chemotherapy is chemotherapy given prior to another treatment, like surgery. The goal of chemotherapy prior to surgery is to reduce the amount of cancer surgeons need to remove. The more complete the resection, the better the odds of long-term mesothelioma survival.

The goal of the new Japanese study was to see how well neoadjuvant chemotherapy and surgery worked in real-world patients.

Researchers enrolled 24 pleural mesothelioma patients from several Japanese hospitals. Twenty patients had three cycles of neoadjuvant chemotherapy. Eighteen of them went on to have surgery. Fifteen of those surgeries were pleurectomy/decortication. This is the preferred lung-sparing surgical approach for pleural mesothelioma.

Everyone who had surgery had macroscopic complete resection. That means that surgeons were able to remove all of the visible cancer.

None of the patients died within three months of the procedure. Ninety-five percent were still alive after one year. Seventy percent were still living two years after surgery. The median overall survival among patients who had neoadjuvant chemotherapy followed by P/D surgery was 3.45 years.

Although their survival improved, their lung function declined slightly. Patients’ lung function after surgery was about 80 percent of their preoperative pulmonary function. Even so, lead researcher Seiki Hasagawa concludes, “Neoadjuvant chemotherapy followed by pleurectomy/decortication was feasible with acceptable survival and mortality/morbidity.”

Approximately 2,500 people in the US receive a mesothelioma diagnosis each year. Most of them worked in an industry that exposed them to asbestos.