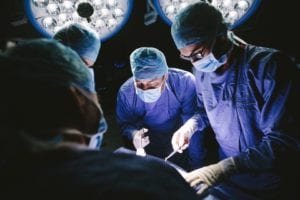 Non-incisional pleurectomy/decortication could be the wave of the future for malignant mesothelioma treatment.

Environmental health experts in Japan say it is possible to remove the diseased pleural lining in a person with mesothelioma without making incisions that could spread their cancer.

The procedure is called non-incisional pleurectomy/decortication. It is a new way to perform mesothelioma surgery that may be safer, faster, and more effective.

Japanese researchers recently published a report on their experience with the technique. The report appears in the newest issue of General Thoracic and Cardiovascular Surgery.

Pleurectomy/decortication (P/D) is performed by a thoracic surgeon. The surgeon first removes as much of the diseased pleural membrane as possible (pleurectomy). The second step is to scrape any remaining evidence of cancer away from the surface of the lungs (decortication).

Non-incisional pleurectomy/decortication is a way to perform P/D without cutting into the pleura.

With standard P/D, surgeons make several incisions into the pleura to separate it from the lungs. One downside of this approach is that it can inadvertently spread tumor cells. It also makes it hard to remove the mesothelioma tumor as a whole (en bloc).

“To overcome such potential disadvantages, we have developed a novel surgical technique without any pleural incision (non-incisional pleurectomy/decortication) to achieve en bloc removal of the entire pleura,” writes study author Fumihiro Tanaka.

Dr. Tanaka and colleagues analyzed the cases of 36 pleural mesothelioma patients. The patients had non-incisional pleurectomy/decortication between 2017 and 2020 at their hospital.

The report shows that 86 percent of patients achieved macroscopic complete resection with this technique. That means surgeons removed all visible evidence of mesothelioma. In 29 patients, they removed the diseased pleura “en bloc”.

Not only were the operations largely successful, but they were also faster. The median total operation time for non-incisional pleurectomy/decortication was 350 minutes. Conventional P/D surgery took a median of 506 minutes.

Thirty-six percent of patients developed complications after surgery. One patient died three months later when their malignant mesothelioma grew back from cells left behind after surgery.

P/D can reduce mesothelioma symptoms and may extend survival but is not a cure.