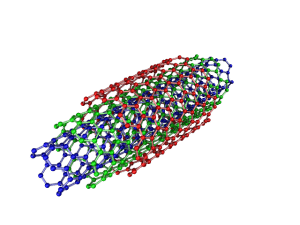 Scientists have long suspected that inhaling multi-walled carbon nanotubes could cause malignant mesothelioma, but a new Japanese study appears to prove that it does – at least in rats.

Asbestos, a naturally-occurring mineral once widely used as an insulator and building product additive, remains the number one cause of both pleural and peritoneal mesothelioma worldwide.

But researchers have theorized that the same things that make asbestos fibers so carcinogenic – their size, shape, and chemical makeup – might make other similarly-shaped molecules like carbon nanotubes dangerous, too.

Multi-walled carbon nanotubes (MWCNTs) are man-made cylindrical molecules of carbon arranged in a concentric pattern. Because of their extraordinary strength and thermal conductivity, MWCNTs are used in electronics and optics, as well as to strengthen carbon fibers baseball bats, golf clubs and car parts.

Like asbestos fibers, MWCNTs are long and thin which, some theorize, could cause them to become stuck in lung tissue in the same way that asbestos fibers become stuck. Over time, the body’s reaction to these biopersistent fibers could trigger cellular changes that lead to mesothelioma.

The Link Between Mesothelioma and MWCNTs

Researchers already knew that MWCNTs could be dangerous. Previous experiments have shown that rats injected with MWCNTs can develop mesothelioma.

But the question for a team of scientists from several Japanese Universities was whether or not MWCNTs could do the same thing if they were just inhaled, the way a worker might accidentally inhale them on the job. Unfortunately, the answer appears to be yes.

When a solution containing MWCNTs was sprayed through the tracheas directly into the lungs of 38 rats, six of them developed mesothelioma and 14 developed lung cancer. The results led molecular toxicologist Masumi Suzui to conclude, “Administration of MWCNT to the lung in the rat induces malignant mesothelioma and lung tumors.”

Because there is so little data on the safety of carbon nanotubes in humans, companies that use them  and government agencies have primarily based their safety recommendations on the results of animal studies like the current one.

Several international agencies, including the British Health and Safety Executive and the US National Institute of Occupational Safety and Health have published strategies for controlling workplace exposures to carbon nanotubes and implementing medical surveillance programs.

Until the hazards posed by these molecules are better understood, those who work around these materials should learn from the experience of asbestos workers and exercise caution to minimize the risk of malignant mesothelioma or other health problems.

Researchers in Iran tested the safety of a new version of the drug pemetrexed in patients with non-small cell lung cancer and malignant pleural mesothelioma. This drug is used to treat these patients when they are not able to get surgery for their cancer. The researchers were able to determine that pemetrexed is safe in patients with non-squamous non-small cell lung cancer. Treatment Choices Malignant pleural mesothelioma is a lung-related cancer like non-small cell lung cancer. It is caused by exposure to asbestos. Treatment for mesothelioma usually involves chemotherapy, radiation therapy, and surgery. Patients may receive more than one type of treatment. This is called multimodal therapy. Pemetrexed is a chemotherapy drug that interrupts the cell replication process that helps … END_OF_DOCUMENT_TOKEN_TO_BE_REPLACED