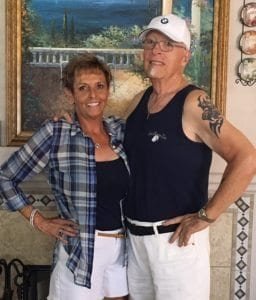 Malignant mesothelioma, an aggressive malignancy caused almost exclusively by asbestos exposure, is one of the rarest and most deadly cancers. Although scientists around the globe continue to develop and test new methods for diagnosing and combatting it, there is still no cure.

For two decades, handling asbestos-laden construction products was just part of Andy Ashcraft’s customer service job at a home improvement store. When the 69-year-old eventually left the job to become a high school math teacher, he thought he’d left that industry far behind.

But, like many people who worked in industries that exposed them to asbestos, the job would come back to haunt him in 2010.

“I worked on the second floor of the high school and I started to notice that I just got tired climbing the steps, more tired than I should be,” recalls Ashcraft. He was put on antibiotics for what his doctor thought might be the start of pneumonia.

Believing that he had less than a year to live, Andy agreed to take part in a clinical trial of the monoclonal antibody amatuximab (MORAb 009). For three years, the drug seemed to be holding his mesothelioma at bay. But, in late 2013, things took a turn for the worst.

“My abdomen started filling up with the fluid, so that was the end of the trial for me,” says Andy. Doctors removed gallons of fluid from Ashcraft’s gut and advised his wife Ruth to consider lining up hospice.

“He was so ill that our adopted family next door helped orchestrate a family photo because they thought it would be his last,” recalls Ruth. Although Andy was put on the standard mesothelioma chemotherapy combination of pemetrexed (Alimta) and cisplatin, Ruth had heard about cases of people treating their cancer with the highly-concentrated oil of the cannabis plant and urged Andy to give it a try, as well.

In January 2014, Ashcraft added daily doses of cannabis oil to his chemotherapy regimen. When he had to stop chemotherapy in July to prepare for surgery on mesothelioma tumors that were pushing through the abdominal wall, he made the decision not to resume it.

Relying only on faith, a healthy lifestyle, a variety of natural oils, and 1 gram daily of high-quality cannabis oil (for which the Ashcraft’s pay $1000 a month), Andy is now  defying all odds with no further progression in his mesothelioma tumor for almost two years.

“I had a scan just a couple of weeks ago and there has been no change,” says Ashcraft. “I’m not in pain, not sick, and I don’t feel bad.”

The “Official” Stance on Marijuana for Cancer

Although cannabis oil and other marijuana plant derivatives have been used for centuries as an alternative treatment for a variety of ailments, including cancer, the US Drug Enforcement Administration still lists marijuana and its cannabinoids (biologically active ingredients) as Schedule I controlled substances.

Even so, 24 states and the District of Columbia have now approved the use of marijuana derivatives to treat some medical conditions. Another 16 states have laws regarding one of the primary bioactive ingredients called cannabidiol (CBD). The Ashcrafts are able to obtain their cannabis oil, which contains a mixture of both CBD and another active ingredient called tetrahydrocannabinol (THC), through California’s Medical Marijuana Program.

For its part, the American Cancer Society acknowledges that a number of laboratory and animal studies have suggested that THC and CBD can “slow growth or cause death” in some types of cancer. But the closest they come to an endorsement is simply a call for more research.

According to the ACS website, “The American Cancer Society supports the need for more scientific research on cannabinoids for cancer patients, and recognizes the need for better and more effective therapies that can overcome the often debilitating side effects of cancer and its treatment. The Society also believes that the classification of marijuana as a Schedule I controlled substance by the US Drug Enforcement Administration imposes numerous conditions on researchers and deters scientific study of cannabinoids.”

But Paul Armentano, Deputy Director of NORML, an organization whose aim is to reform marijuana laws, says the ACS must also shoulder some blame for the lack of research to-date. “As the largest non-governmental funder of cancer research in the US, the ACS is equally complicit in failing to promote any legitimate scientific inquiries into the cannabis plant,” says Armentano.

In the meantime, Ruth and Andy Ashcraft are not waiting for more research to tell them what they already know: What they are doing seems to be keeping Andy’s mesothelioma in check. He feels and looks strong and healthy, more than five years after he was supposed to have died.

Andy takes one gram daily of cannabis oil which he ingests in four increments using capsules that Ruth fills. Because the cannabis oil contains very low levels of THC, the component in marijuana that causes a “high”, it does not have a psychoactive effect on him.  He also takes fish oil, 8 drops daily of frankincense oil, 4 drops of lavender oil, and 8 drops of a third oil which can be lavender, thyme, clove, orange or lemon. He gets acupuncture every other week and monthly massages and he and Ruth try to stay active. The one thing he sheepishly admits that he doesn’t watch carefully is his diet.

“There are a lot of people who don’t want people doing this [cannabis oil], but I think it has really done a lot for me,” says Andy. “I just feel very fortunate that we are able to get it.”

“We were always very up front with our doctors and I think that is important,” adds Ruth. “But cannabis is a proven therapy and has been used for many years. Cannabis is natural and God put it on this earth as a medicine. You just have to be very careful.”

Stay tuned to the Surviving Mesothelioma website for the next installment in our series on cannabis and medicinal uses of marijuana.

The information in this article is not a substitute for professional medical advice, examination, diagnosis or treatment. You should always seek the advice of your physician or other qualif
ied health professional before starting any new treatment or making any changes to an existing treatment. You should not delay in seeking or disregard medical advice based on information in this article.  Cannabis oil is NOT FDA approved for the treatment of any cancer.

The MESOMICS project is the most comprehensive dataset of mesothelioma genomics to date. The data in this resource can help researchers to design precision treatments for mesothelioma patients This project was created by an international collaboration between scientists from France, Chile, and the United States. Understanding Diagnosis Malignant pleural mesothelioma is a rare cancer caused by asbestos exposure. There are approximately 2,000 cases of mesothelioma diagnosed in the United States alone every year. Because it is so rare, the treatment options are very limited compared to other types of cancer. The limited treatment options combined with the cancer’s ability to spread without being noticed makes mesothelioma a deadly disease. Median overall survival for mesothelioma patients is a little over a … END_OF_DOCUMENT_TOKEN_TO_BE_REPLACED