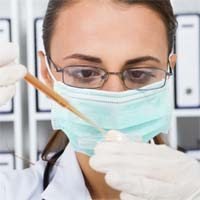 Getting an accurate diagnosis is one of the biggest challenges for patients with malignant pleural mesothelioma.  Because mesothelioma is such an aggressive cancer, survival often hinges on getting a diagnosis and starting appropriate treatment as early as possible. Unfortunately, mesothelioma symptoms, which can include shortness of breath, cough and chest pain, mimic many other conditions, including other types of lung cancer.

Now, scientists with a company called Rosetta Genomics, a developer of microRNA-based molecular diagnostics, believe they have found a better way to distinguish mesothelioma cancer from other types of lung cancers that may also affect the pleura, or the lining around the lungs.

In an online press release, Tina Edmonston, MD, Medical Director and Head of Clinical Laboratory at Rosetta Genomics said “Differentiating malignant pleural mesothelioma from primary and metastatic carcinoma in the lung and pleura can be challenging for pathologists, even with the use of immunohistochemistry. There is no single immunohistochemical marker that distinguishes between malignant pleural mesothelioma and various carcinomas that may be in the differential diagnosis. Moreover, the choice of markers, as well as interpretation of the results in equivocal cases can be subjective.”

MicroRNAs (miRNAs) are recently discovered cell components that act as master switches for protein synthesis inside cells.  The presence or absence of certain microRNAs has been shown to be a reliable predictor (also called a biomarker) of how cells will function. The Rosetta Genomics researchers developed a microRNA assay based on tests of 33 samples of malignant pleural mesothelioma cells and 210 samples of carcinoma cells.

The team found that Hsa-miR-193-3p was overexpressed in mesothelioma, while hsa-miR-200c and hsa-miR-192 were overexpressed in peripheral lung adenocarcinoma and carcinomas that frequently metastasize, or spread, to the lung pleura.  Based on these results, the team tested the assay, called the miRview meso test, on 68 tissue samples from the lung and pleura.  Their findings were encouraging for clinicians charged with the difficult task of pinpointing mesothelioma.

The research team reported that the MiRview meso assay reached a sensitivity of 100% and a specificity of 94% in blinded tests.  They conclude, “This diagnostic assay can provide a useful tool in the differential diagnosis of malignant pleural mesothelioma from other malignancies in the pleura.”

The largest risk factor for developing mesothelioma is exposure to asbestos.  Although the use of the mineral is now limited in many countries, the long latency of the disease has resulted in a steady rise in the number of cases in the U.S. and around the world.

The research findings were published in a peer reviewed article in the online version of the Journal of Molecular Diagnostics.

The MESOMICS project is the most comprehensive dataset of mesothelioma genomics to date. The data in this resource can help researchers to design precision treatments for mesothelioma patients This project was created by an international collaboration between scientists from France, Chile, and the United States. Understanding Diagnosis Malignant pleural mesothelioma is a rare cancer caused by asbestos exposure. There are approximately 2,000 cases of mesothelioma diagnosed in the United States alone every year. Because it is so rare, the treatment options are very limited compared to other types of cancer. The limited treatment options combined with the cancer’s ability to spread without being noticed makes mesothelioma a deadly disease. Median overall survival for mesothelioma patients is a little over a … END_OF_DOCUMENT_TOKEN_TO_BE_REPLACED