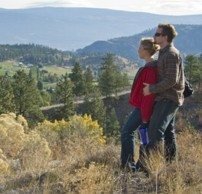 Outdoor enthusiasts are being warned to steer clear of the trails around abandoned gold mines in California’s Sierra Nevada foothills, or risk mesothelioma and other asbestos related diseases.

A study by The Sierra Fund (TSF) says mountain bikers, hikers and horseback riders in these areas could be in danger of serious health hazards including mesothelioma because of high levels of toxic minerals in the soil around the old mines.  The study, called The Gold Country Recreational Trails and Abandoned Mines Assessment, found many of these public lands to be contaminated with lead, arsenic and asbestos.

According to Elizabeth Martin, CEO of The Sierra Fund, “More than 100 years after the end of the Gold Rush era, the environmental, cultural and health impacts of that time have still not been assessed or addressed. Our study documents that these abandoned mines pose a toxic health threat on public lands that are widely used for recreational activities. The time has come for a serious assessment of abandoned mines, and the public needs to be informed about potential exposure to toxic heavy metals and asbestos in areas with abandoned mines.”

Asbestos is a naturally-occurring component of the serpentine rock found throughout California. Used for years in industrial applications, in its dust form it has been shown to cause lung cancer, mesothelioma, asbestosis and a host of other health problems. Although industrial workers now follow strict safety precautions when working around asbestos, casual recreation enthusiasts may be unaware of the danger.  Because off-road vehicles, bikes and hiking boots can stir up dust, The Sierra Fund warns that asbestos can be freely inhaled by people hoping to enjoy the ‘fresh air’.  The greater and more frequent the exposure, the greater the statistical likelihood of one day being diagnosed with mesothelioma or another asbestos related disease.

The Sierra Fund announced the results of the study on the steps of the California state capitol building in Sacramento.  The group says additional assessment of California’s many outdoor recreational areas is ‘urgently needed’. A spokesman for the Central California division of the Bureau of Land Management says the mining areas would be nearly impossible to clean up because there are so many of them and because the minerals are so abundant in the soil. The Sierra Fund is pushing for warning signs and, in some cases, restricted public access.

The MESOMICS project is the most comprehensive dataset of mesothelioma genomics to date. The data in this resource can help researchers to design precision treatments for mesothelioma patients This project was created by an international collaboration between scientists from France, Chile, and the United States. Understanding Diagnosis Malignant pleural mesothelioma is a rare cancer caused by asbestos exposure. There are approximately 2,000 cases of mesothelioma diagnosed in the United States alone every year. Because it is so rare, the treatment options are very limited compared to other types of cancer. The limited treatment options combined with the cancer’s ability to spread without being noticed makes mesothelioma a deadly disease. Median overall survival for mesothelioma patients is a little over a … END_OF_DOCUMENT_TOKEN_TO_BE_REPLACED