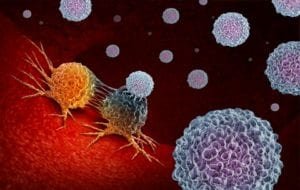 According to a report published in the Journal of Clinical Investigations, PARP inhibitors worked especially well in cancers with mutations in their DNA repair genes.

PARP stands for poly (ADP-ribose) polymerase. It represents a family of proteins involved in a number of cellular processes, including DNA repair. PARP is also involved in apoptosis, or programmed cell death. Olaparib (Lynparza) is an example of a PARP inhibitor.

PARP inhibitors attack tumors that already have defective DNA repair mechanisms. Some cases of pleural mesothelioma have defects on DNA repair genes such as BRCA or ERCC1.

“The findings of this study substantially change our understanding of how PARP inhibitors work,” says lead author Chris Lord with The Institute of Cancer Research. “We now know that they not only kill tumors by damaging their DNA, but also by attracting immune cells to attack them–acting as a sort of double-pronged attack.”

Immunotherapy response in patients with ERCC1-deficient malignant mesothelioma could be especially strong. The lung cancer study showed the biggest response among patients with this mutation.

Recently, researchers in New York explored the immunotherapy response in people who received the medicine directly into the space around the lungs. Intrapleural immunotherapy may be a more effective delivery method for pleural mesothelioma patients, in particular.

Right now, only 10 to 20 percent of cancer patients respond to immunotherapy. The new research suggests that PARP inhibitors could improve those odds for mesothelioma patients and others battling cancer.

Precision drugs could unmask cancers to the immune system and boost the effects of immunotherapy [news release]. The Institute of Cancer Research. https://www.icr.ac.uk/news-archive/precision-drugs-could-unmask-cancers-to-the-immune-system-and-boost-the-effects-of-immunotherapy. Accessed March 11, 2019.

A new study shows that a multifaceted approach to quitting smoking can help patients diagnosed with cancer. One rare type of cancer is mesothelioma. This cancer is caused by exposure to asbestos. It occurs in the lining of different parts of your body, usually in the abdomen or the lungs. Mesothelioma often takes decades to develop after being exposed to asbestos. The symptoms can be hard to diagnose because they look like other, more common diseases. This makes treating mesothelioma more difficult, too. The cancer has more time to spread while doctors are struggling to make a diagnosis. There are other factors that make cancers like mesothelioma difficult to treat. Smoking after a cancer diagnosis can lead to worse survival … END_OF_DOCUMENT_TOKEN_TO_BE_REPLACED