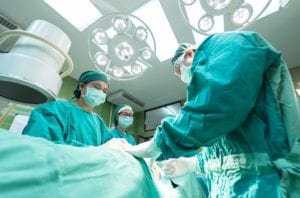 A new French study suggests that peritoneal mesothelioma patients who undergo CRS/HIPEC treatment  have better outcomes when two chemotherapeutic agents are used instead of just one.

The introduction of cytoreductive surgery (CRS) in combination with hyperthermic intraperitoneal chemotherapy (HIPEC) has dramatically improved the prognosis for patients with peritoneal mesothelioma, a rare form of the asbestos cancer that occurs in the abdomen.

But a team of researchers from cancer hospitals across France wanted to know if outcomes are better with some HIPEC drugs than they are with others. Their results seem to show a clear mesothelioma survival advantage to platinum-based regimens (those including cisplatin) that include at least one other agent.

Treating a Rare Type of Mesothelioma

During CRS, surgeons remove as much of the mesothelioma tumor as possible. HIPEC is then used to kill any residual mesothelioma cells by rinsing a heated solution of chemotherapy drugs through the abdomen.

In their new CRS/HIPEC study, the French research team, led by Brice Malgras with the University of Paris, identified five different drugs that are typically used for HIPEC: cisplatin, doxorubicin, mitomycin-C, oxaliplatin, and irinotecan.

They focused on the cases of 249 peritoneal mesothelioma patients who were treated with CRS/HIPEC between 1989 and 2014. All were 80 years old or younger and all had a reasonably good performance status (a measure of overall health and activity).

Although there was no significant statistical difference in mesothelioma survival overall, survival was better among patients who were treated with two drugs rather than just one.

“This large study seems to show improved overall survival when combined chemotherapeutic agents, especially with platinum-based regimens, are used for HIPEC in patients with peritoneal mesothelioma,” the researchers write in the Annals of Surgical Oncology.

The association between survival and HIPEC drug combination was seen among patients who underwent complete cytoreduction (meaning the surgeon was able to remove all of the visible tumor) and who had the epithelioid mesothelioma subtype.

The team goes on to suggest that, in order to be clinically useful, these findings need to be confirmed in a randomized controlled trial.

As the French team works on refining the HIPEC portion of this mesothelioma procedure, researchers in Spain are looking at ways to make the CRS portion less invasive.

Earlier this year, doctors at the University Hospital Reina Sofia in Cordoba, Spain announced that they had successfully performed this extensive multi-part procedure through tiny incisions using an internal camera for guidance. CRS for peritoneal mesothelioma typically requires a long abdominal midline incision.

Mesothelioma patients treated with the minimally invasive approach had no significant complications and none had relapsed at 9.5 months post-surgery.

Researchers in Iran tested the safety of a new version of the drug pemetrexed in patients with non-small cell lung cancer and malignant pleural mesothelioma. This drug is used to treat these patients when they are not able to get surgery for their cancer. The researchers were able to determine that pemetrexed is safe in patients with non-squamous non-small cell lung cancer. Treatment Choices Malignant pleural mesothelioma is a lung-related cancer like non-small cell lung cancer. It is caused by exposure to asbestos. Treatment for mesothelioma usually involves chemotherapy, radiation therapy, and surgery. Patients may receive more than one type of treatment. This is called multimodal therapy. Pemetrexed is a chemotherapy drug that interrupts the cell replication process that helps … END_OF_DOCUMENT_TOKEN_TO_BE_REPLACED