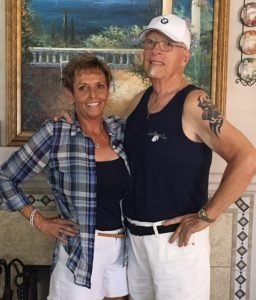 Malignant mesothelioma, an aggressive malignancy caused almost exclusively by asbestos exposure, is one of the rarest and most deadly cancers. Although scientists around the globe continue to develop and test new methods for diagnosing and combating it, there is still no cure.

When we spoke with Andy Ashcraft, he had just returned from receiving a graft for skin cancer, a problem that runs in his family and one he believes was made worse by the chemotherapy he underwent for pleural mesothelioma.

Even so, Ashcraft does not speak like a man who feels or thinks of himself as sick. That is because, since September of 2014 when doctors removed a large pleural mesothelioma tumor that had pushed through his abdominal wall, his mesothelioma has essentially stopped in its tracks.

“July 2014 was the last time I had chemotherapy,”Ashcraft told Surviving Mesothelioma in a phone interview. “I chose not to get back on chemotherapy after the surgery because I just really feel that the long term effects of that poison is not good for you.”

Shortly after his 2010 diagnosis with Stage IV mesothelioma, Ashcraft entered a clinical trial of amatuximab (MORAb 009), a monoclonal antibody for mesothelin-expressing cancers like mesothelioma. For more than three years, he took the trial drug and regular rounds of chemotherapy. But when his abdomen began to fill with gallons of fluid, Andy was taken off the trial. Things looked grim.

“He looked like he was 3 years pregnant,” recalls Ruth Ashcraft. “He was very gray and fatigued. I really thought I was going to lose my husband at that point.”

But Ruth had been doing her homework during Andy’s long chemotherapy sessions and had hit upon a controversial alternative cancer therapy: cannabis oil.

“When people started telling me about cannabis and its effect on cancer, that really got my interest,” says Ruth. “There were a lot of hours when Andy would fall asleep and I would go online and read.”

What she read got her and Andy excited. Although there were few studies testing cannabis oil in cancer patients, there was enough evidence to convince the Ashcraft’s that the highly-concentrated natural oil extracted from the buds of the marijuana or cannabis plant was worth a try.

Ashcraft started on a tiny dose of cannabis oil, which he obtained through California’s Medical Marijuana Program, in January 2013. Within a few months, he added a variety of other natural oils designed to boost his immune system and keep his mesothelioma in check. To date, there has been no further progression of the mesothelioma that was supposed to have killed him.

How Does Cannabis Oil Fight Mesothelioma?

Although Andy and Ruth are careful to say that cannabis oil is not a “cure-all” and is part of a more extensive natural protocol they are using to combat mesothelioma, it is clearly having an impact. Unlike chemotherapy, which poisons cancer cells (and, often, healthy cells, as well), compounds in cannabis oil act on a signaling metabolite called ceramide in the cancer cells to bring about natural cell death.

The primary active ingredients in cannabis oil, tetrahydracannabinol (THC) and cannabidiol (CBD), cause a build up of ceramide, eventually killing the mitochondria that cells need for energy. The excess ceramide also disrupts the “digestive system” of cancer cells and their ability to metabolize calcium. Together, this all leads to one thing: the demise of mesothelioma cells. The key to the success of the system seems to be maintaining a steady therapeutic dose of CBD and THC over time.

“Cannabinoids have consistently shown anti-cancer activity in vitro and in vivo in a variety of cancerous cell lines in preclinical trials over the past several decades,” Paul Armentano, Deputy Director of NORML, an organization dedicated to reforming marijuana laws, said in an email.

“However, because this research remains limited to preclinical models and case-reports, questions surrounding dosing and efficacy in humans remain unanswered. At present, neither the U.S. government nor the American Cancer Society appear particularly interested in promoting clinical research in this area.”

Ashcraft began his experimentation with cannabis oil with a dose less than half the size of a grain of rice, three times a day. That doubled in three-day increments until he reached his present dose of 1 gram a day which is spread over four doses. Cannabis oil can be aerosolized and inhaled or it can be ingested. Andy takes his inside honey gel caps or in vegetable capsules which Ruth prepares for him.

“Every time I go into my doctor and we do a scan, there is no change,” says Andy, whose latest scan was just two weeks ago. “You gotta have faith and a positive attitude and a caregiver who really cares, since it is a lot of work.”

In addition to cannabis oil, Ashcraft takes fish oil and other high quality natural oils, including frankincense, sandalwood, lavender, thyme, clove and others. He has acupuncture every two weeks, gets monthly massages, and exercises regularly.  Although his physicians have expressed skepticism about the Ashcrafts’ alternative mesothelioma therapy, they have accepted the fact that something is clearly working for Andy.

“We may not know exactly what it is that is working, but this is not a survivable disease,” says Ruth.  “In 2010, he was given less than a year to live and now we travel and do everything we want to do.”

In the next part of our series, we’ll explore the origins of Ashcraft’s mesothelioma, the chronology of his various treatments, and the legal and medical controversy surrounding the use of medical marijuana in cancer treatment.

The information in this article is not a substitute for professional medical advice, examination, diagnosis or treatment. You should always seek the advice of your physician or other qualified health professional before starting any new treatment or making any changes to an existing treatment. You should not delay in seeking or disregard medical advice based on information in this article.  Cannabis oil is NOT FDA approved for the treatment of any cancer.

Researchers in Iran tested the safety of a new version of the drug pemetrexed in patients with non-small cell lung cancer and malignant pleural mesothelioma. This drug is used to treat these patients when they are not able to get surgery for their cancer. The researchers were able to determine that pemetrexed is safe in patients with non-squamous non-small cell lung cancer. Treatment Choices Malignant pleural mesothelioma is a lung-related cancer like non-small cell lung cancer. It is caused by exposure to asbestos. Treatment for mesothelioma usually involves chemotherapy, radiation therapy, and surgery. Patients may receive more than one type of treatment. This is called multimodal therapy. Pemetrexed is a chemotherapy drug that interrupts the cell replication process that helps … END_OF_DOCUMENT_TOKEN_TO_BE_REPLACED