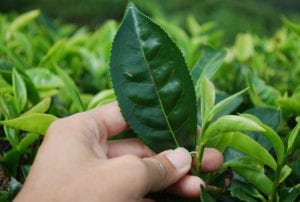 A new type of nanoparticle derived from green tea leaves has been shown to kill lung cancer cells and may one day do the same for pleural mesothelioma.

Scientists at Swansea University in Wales in collaboration with researchers at Bharathiar University in India discovered the power of the tea-based nanoparticles—called quantum dots—when attempting to create a less expensive tool for lung cancer imaging.

“The main reason we started looking at tea leaves is that chemically synthesised quantum dots cost between £250 and £500 per microgram,” lead researcher Dr. Sudhagar Pitchaimuthu told the BBC. “Whereas organically-derived ones can be manufactured for £10 per microgram, and at the same time they don’t poison healthy cells surrounding the cancer.”

Nanoparticles are man-made particles so tiny that they can penetrate the tiny pores in the wall of cancer cells like malignant mesothelioma. Nanoparticles are playing an increasingly important role in materials science, as well as in healthcare.

In the new study, the tea-derived quantum dots, which are 4,000th of the width of a human hair, did prove to be highly fluorescent, just as the researchers had hoped. But the “icing on the cake”, according to the team, was the fact that the lung cancer cells into which the quantum dots were inserted began to die.

Further research using flow cytometry showed that the lung cancer cells were unable to complete their cycle of replication, but were instead being stopped in the “S phase”, during which the DNA is supposed to split to form a new cell.

“We now need to identify an enzyme which can deliver them to cancers in living creatures, without affecting surrounding healthy tissues,” says Dr. Pitchaimuthu.

This is not the first time that green tea has been used to kill cancer cells. Numerous studies have suggested that the polyphenols in green tea can help support the treatment of mesothelioma and other cancers by reducing inflammation, fighting oxidation, and boosting the immune system.

The next step for the potential green-tea quantum dots cancer treatment is to test it in animals, which the research team hopes to start doing shortly. If all goes well and the treatment can be shown to be safe, human trials could follow.

The research couldn’t come too soon for the thousands of mesothelioma patients around the world.

A Canadian study found that tracking trends in mesothelioma at the local level can help officials predict future mesothelioma cases. Most mesothelioma tracking efforts focus on the national scale and monitor cases across a country or region. This study, published in Cancer Causes and Control, looked at mesothelioma cases based on industrial sources of asbestos in Ontario and British Columbia. Growing Number of Cases Asbestos is a toxic material that is used in many commercial and industrial products. It’s durability and heat resistance made it very popular in products like construction materials, textiles, and vehicles. Mesothelioma is a deadly cancer caused by exposure to asbestos. It was first identified as a cancer-causing material in 1977 by the International Agency for … END_OF_DOCUMENT_TOKEN_TO_BE_REPLACED