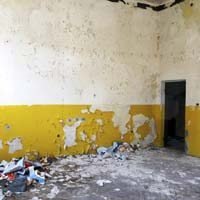 A British company has developed a way to help protect construction workers and building occupants from the threat of mesothelioma, a cancer caused by asbestos.  Birmingham, England-based Datatecnics has released the world’s first asbestos-sensing film.  When walls containing asbestos are papered with the polymer, an alarm will sound if the film is breached.

In an interview with Electronics Weekly, Datatecnics CEO Mohammed Zulfiquar explains, “Asbestos is in a lot of public buildings. The Government estimates that 70 percent of UK schools contain it and the guidance from the Health and Safety Executive is to manage most of it, not remove it.”

Asbestos has long been linked to mesothelioma, a malignancy affecting the membranous tissue encasing internal organs.  Asbestos was once commonly used as an insulator and building material.  If left intact and undisturbed, the material usually does not usually pose a health threat.  But as it disintegrates over time or is disrupted, such as during a repair or renovation project or even when a nail is put into a wall, fibers can become airborne.  Inhalation of these fibers is the number one trigger for mesothelioma.

Mesothelioma is a major threat to construction workers as well as to people such as teachers, who work daily in older buildings that contain asbestos. The new polymer, called an ‘asbestos disturbance automated alert system’ (ADAAS) is made with a fine web of micro sensoring tracks that detect any breaches through connection to a central control panel.  The system sounds a warning for any disturbance that could potentially release asbestos fibers.

Although the World Health Organization estimates that more than 100,000 people worldwide die each year of mesothelioma and other asbestos-related diseases, monitoring and/or removing asbestos from all buildings that contain it is impractical and time consuming. In some cases, removing asbestos can itself release enough airborne fibers to put those involved at risk for mesothelioma.

Datatecnics says the ADAAS wall covering can eliminate the need to carry out manual asbestos inspections and monitoring, saving time and money and potentially preventing cases of mesothelioma. ADAAS can be painted or papered over.  The company is now looking for investors to help it bring the material to market.

The MESOMICS project is the most comprehensive dataset of mesothelioma genomics to date. The data in this resource can help researchers to design precision treatments for mesothelioma patients This project was created by an international collaboration between scientists from France, Chile, and the United States. Understanding Diagnosis Malignant pleural mesothelioma is a rare cancer caused by asbestos exposure. There are approximately 2,000 cases of mesothelioma diagnosed in the United States alone every year. Because it is so rare, the treatment options are very limited compared to other types of cancer. The limited treatment options combined with the cancer’s ability to spread without being noticed makes mesothelioma a deadly disease. Median overall survival for mesothelioma patients is a little over a … END_OF_DOCUMENT_TOKEN_TO_BE_REPLACED