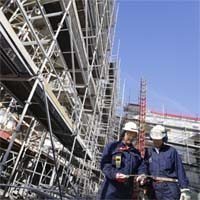 British researchers studying occupational deaths in England and Wales may have found a way to explain why some people exposed to asbestos develop asbestosis while others developmesothelioma.

Although both diseases are caused primarily by occupational exposure to asbestos, the new study published in a British medical journal suggests that heavier exposure earlier in life may be more likely to cause asbestosis than mesothelioma. The researchers based their results on an exhaustive study of 33,751 mesothelioma deaths and 5396 asbestosis deaths. Death rates were plotted by age group. Because mesothelioma can take decades to develop, it was not surprising that death rates for both diseases were much higher among the oldest birth cohorts.

But what was a surprise is that the highest mortality from mesothelioma was found among people born during 1939-1943, whereas mortality from asbestosis peaked in men born between 1924 and 1938. Why were asbestos-exposed men born earlier more likely to die of asbestosis?  One explanation may be the intensity of their exposure as young men. The researchers believe that asbestosis deaths may be determined by cumulative exposure to asbestos before age 45. If heavier exposure at younger ages is more likely to cause asbestosis, and exposure was more likely to be heavy between 1924 and 1938, it would explain the age differences between asbestosis and mesothelioma deaths.

Mesothelioma is a malignancy of the membranes that surround and protect internal organs. When tiny asbestos fibers lodge in the tissue, the resulting chronic inflammation can eventually trigger changes at the cellular level that result in cancer. Asbestosis or pulmonary fibrosis, also results from the irritation by asbestos fibers. In the case of asbestosis, fibers cause scar tissue (fibrosis) inside the lungs, which does not expand and contract like healthy lung tissue. Like mesothelioma, symptoms of this progressive condition can include cough, chest pain and shortness of breath.

The research study was prompted by the fact that occupational mortality from asbestos-related diseases did not decline in England and Wales during 1991-2000, despite increased government regulations on asbestos use. Great Britain currently has the world’s highest per-capita incidence of mesothelioma and other asbestos diseases largely because of the post-war rebuilding that occurred at the peak of asbestos’ popularity in the 1940’s and 1950’s.

Researchers in Italy say a virus normally found in goats could offer a new, safer way to kill malignant mesothelioma cells and improve patient outcomes.  The virus is caprine herpesvirus 1 (CpHV-1). It has been blamed for bouts of spontaneous abortions in goat herds. But it does not appear to cause any disease in humans. In fact, previous studies show CpHV-1 can kill several types of human cancer cells.  The newest study of CpHV-1 was conducted at the National Cancer Institute IRCCS G. Pascale Foundation in Naples. Scientists there made two important discoveries. They found that not only can CpHV-1 kill mesothelioma cells without harming normal cells, but it might also have the potential to make chemotherapy work better.  Mesothelioma … END_OF_DOCUMENT_TOKEN_TO_BE_REPLACED