Home / News / Mesothelioma Patients May Be Low in Antioxidants 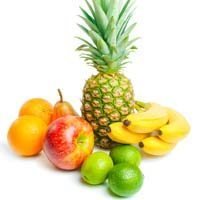 New research suggests that the antioxidant vitamins found in abundance in fruits and vegetable may have a protective effect against malignant pleural mesothelioma.

The news comes from a University in Turkey, where environmentally-induced mesothelioma is alarmingly common due to high erionite content in some small towns. Erionite is a naturally-occurring mineral that is structurally similar to asbestos, the primary cause of mesothelioma around the world. Erionite not only exists in the soil in these Turkish towns, but is also incorporated into hundreds of homes built from erionite-laden rocks.

In an effort to evaluate whether or not certain key antioxidant vitamins might protect people against the deadly cancer, Turkish researchers enrolled 160 subjects, 42 of whom had been diagnosed with malignant pleural mesothelioma. The remaining 118 were healthy. Test subjects were drawn from towns that were free of environmental erionite as well as from those that were heavily contaminated with erionite.

Because of their ability to neutralize destructive ‘free radicals’, the byproducts of metabolism, antioxidant vitamins found in foods and supplements are believed to offer protection against certain kinds of diseases and conditions. Lack of certain antioxidants, such as ascorbic acid (Vitamin C) can even cause illnesses, as evidenced by historic cases of scurvy among sailors at sea for months without fresh produce. Theoretically, because of their high metabolic rate, cancer cells produce more destructive free radicals in the body than healthy cells.

As predicted, the mesothelioma patients in the study had the lowest levels of antioxidant vitamins in their blood serum. The research team looked specifically at levels of beta carotene (Vitamin A), alpha tocopherol (Vitamin E), retinol, and ascorbic acid (Vitamin C). The test group consisted of 51% men and 49% women, but there did not appear to be any relationship between sex and antioxidant levels. Likewise, there was no difference in the serum antioxidant levels of healthy people living in safe environments and those who came from erionite-contaminated areas. People without mesothelioma had consistently higher levels of antioxidants in their systems than people who had the disease.

Although the study appears to suggest that antioxidants may be protective in mesothelioma as they are in other conditions, many questions remain. It is not known whether the lower antioxidant levels existed before patients became sick and may have contributed to their mesothelioma, or whether low antioxidant levels were the result of the body’s efforts to combat the destructive results of the cancer. In addition, because the researchers did not examine the diets of test subjects, it is not possible to know whether the higher antioxidant levels in some patients came from good dietary habits, supplements, genetics, less stressful lifestyles, or a combination of factors.

Although there is no proven dietary method for fighting mesothelioma or other cancers, dieticians recommend a diet rich in fruits, vegetables, lean protein and whole grains to maintain energy and stamina during cancer treatment.  Always discuss any dietary changes with your doctor.

A Canadian study found that tracking trends in mesothelioma at the local level can help officials predict future mesothelioma cases. Most mesothelioma tracking efforts focus on the national scale and monitor cases across a country or region. This study, published in Cancer Causes and Control, looked at mesothelioma cases based on industrial sources of asbestos in Ontario and British Columbia. Growing Number of Cases Asbestos is a toxic material that is used in many commercial and industrial products. It’s durability and heat resistance made it very popular in products like construction materials, textiles, and vehicles. Mesothelioma is a deadly cancer caused by exposure to asbestos. It was first identified as a cancer-causing material in 1977 by the International Agency for … END_OF_DOCUMENT_TOKEN_TO_BE_REPLACED