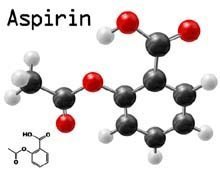 A group of the world’s top mesothelioma researchers say aspirin may have a role to play in fighting malignant pleural mesothelioma.

Aspirin (acetylsalicylic acid or ASA) is an that is known to help reduce the incidence and spread of certain inflammation-related cancers. Mesothelioma, a cancer that starts on the membrane around the lungs and tends to grow and spread quickly, is caused by an inflammatory response to asbestos fibers. That response is related to an inflammatory molecule called high-mobility group box 1 (HMGB1).

Researchers at the University of Hawaii Cancer Center, along with colleagues at Cedars Sinai Medical Center in New York and two Italian hospitals theorized that a drug that fights inflammation might fight mesothelioma, too. Using mice infected with HMGB1-secreting or non-secreting human mesothelioma cell lines, the researchers administered aspirin and Box A, an HMGB1 inhibitor.

“ASA/SA, at serum concentrations comparable to those achieved in humans taking therapeutic doses of aspirin, and BoxA, a specific inhibitor of HMGB1, markedly reduced malignant mesothelioma growth in xenograft mice and significantly improved survival of treated animals,” writes Haining Yang of the University of Hawaii.

The researchers believe that both the aspirin and the BoxA improved the survival of the mice with mesothelioma by inhibiting the activity of the HMGB1. In addition, using the BoxA along with the aspirin appeared to target the HMGB1 more efficiently while protecting the mice against the gastrointestinal side effects of high doses of aspirin.

In 2010, Dr. Yang and his colleague Michaele Carbone of the University of Hawaii were among the first to determine how asbestos causes mesothelioma by triggering inflammation through the release of HMGB1.

Their new report in Cell Death and Disease concludes that the current findings are “poised to provide broadly applicable information” that can be used to improve the outlook of patients with malignant pleural mesothelioma. About 2,500 Americans are diagnosed with this rare and treatment-resistant cancer every year. Most of them have worked in an asbestos industry.

Certain types of biomarkers can help doctors predict the best chemotherapy treatment for patients with malignant pleural mesothelioma. Researchers from Cairo University in Egypt looked at 91 mesothelioma patients. They tested two different chemotherapy drug combinations: pemetrexed plus cisplatin and gemcitabine plus cisplatin. FDA Approved Treatment Options Mesothelioma is a rare cancer caused by asbestos and standard therapies are limited. Most mesothelioma patients have chemotherapy as their first-line treatment. If they are healthy enough, they may also have surgery or radiation therapy. Chemotherapy is a group of toxic drugs that kill cells by damaging their DNA. As of this writing, the only FDA approved chemotherapy for malignant pleural mesothelioma is a combination of pemetrexed and cisplatin. Gemcitabine is not an … END_OF_DOCUMENT_TOKEN_TO_BE_REPLACED