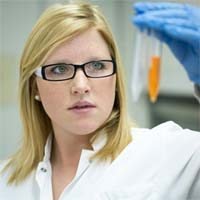 A serum protein that can be detected with a blood test might help doctors predict how well a mesothelioma patient will respond to chemotherapy.

Researchers in Slovenia tested the levels of a protein called survivin in 78 blood samples from patients with malignant pleural mesothelioma to determine its impact on chemotherapy response.

Survivin is a protein produced by cells and involved in regulating their life cycles. It is part of a family of proteins called inhibitors of apoptosis (cell death).

In general, the greater the levels of survivin in a cell sample, the lower the rate of apoptosis. Not surprisingly, survivin levels are often high in mesothelioma and other types of tumors.

They found that most mesothelioma patients had a median serum survivin level of 4.1 pg/mL before chemotherapy but that those whose mesothelioma treatment response was not as good had significantly higher levels of the biomarker before treatment.

The study results were unexpected. The research team found that patients whose blood test revealed an increase in the survivin biomarker after chemotherapy tended to have better chemotherapy response and longer progression-free survival.

“These results suggest that serum survivin levels before and during chemotherapy could serve as a biomarker predicting malignant mesothelioma treatment response,” writes author Katja Goricar, a researcher with the institute of biochemistry at the University of Ljubljana.

The study also found that patients whose blood samples revealed higher levels of the mesothelioma biomarker after chemotherapy had better overall survival.