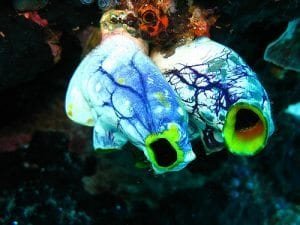 There is new evidence that compounds isolated from a sea squirt found in the waters off of the Indonesian coast may hold the key to fighting mesothelioma and several other malignancies.

The potential anticancer and antimicrobial properties are found in polysulfur aromatic alkaloids found in a Pacific sea squirt whose scientific name is Lissoclinum badium.

In a new article in the Journal of Natural Products, researchers from Japan’s Tohoku Medical and Pharmaceutical University and Sam Ratulangi University in Indonesia say they’ve discovered how these compounds may kill certain kinds of cancer cells, including pleural mesothelioma.

Their research could open the door to formal testing and, eventually, new and more effective mesothelioma treatments and longer survival.

Cancer drug discovery research based on marine organisms from Eastern Indonesia is not a new phenomenon.

In 2015, researcher Yosmina Tapilatu of the Deep Sea Research Center at the Indonesian Institute of Sciences published an extensive paper on the status of such research dating back to the 1990s.

The paper includes a list of marine organisms from sponges and corals to seaweeds and sea squirts like Lissoclinum badium that produce compounds with anticancer properties. Alkaloids like the compound used on mesothelioma cells in the new study are among the most common pharmacologically active compounds found in these organisms.

To evaluate the potential of these alkaloids to combat cancer, the research team first tested them on different cancer cell lines in the laboratory including colon cancer cells, cervical cancer cells, breast cancer cells and pleural mesothelioma cells.

They found that one alkaloid in particular – Lissoclibadin 1 – was the most toxic to all of the cells, including the mesothelioma cells. The compound induced mesothelioma cell death (apoptosis) by reactivating a cell-death signaling pathway that is often turned off in cancer cells.

With the promise of the compounds validated in vitro, the team moved on to testing in live mice that had been infected with colon cancer.

The news that these compounds killed cancer cells without causing serious side effects is especially exciting for mesothelioma patients since current treatments including chemotherapy, surgery, and radiation often cause complications and are only marginally effective at extending mesothelioma survival.

The report concludes that Lissoclibadin 1 “has potential as a chemotherapeutic candidate” for pleural mesothelioma and other cancers and should be investigated further in preclinical trials.

Currently, Alimta (pemetrexed) is the only chemotherapeutic agent approved by the FDA specifically for the treatment of mesothelioma.

The MESOMICS project is the most comprehensive dataset of mesothelioma genomics to date. The data in this resource can help researchers to design precision treatments for mesothelioma patients This project was created by an international collaboration between scientists from France, Chile, and the United States. Understanding Diagnosis Malignant pleural mesothelioma is a rare cancer caused by asbestos exposure. There are approximately 2,000 cases of mesothelioma diagnosed in the United States alone every year. Because it is so rare, the treatment options are very limited compared to other types of cancer. The limited treatment options combined with the cancer’s ability to spread without being noticed makes mesothelioma a deadly disease. Median overall survival for mesothelioma patients is a little over a … END_OF_DOCUMENT_TOKEN_TO_BE_REPLACED