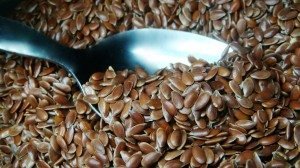 There is new evidence that an antioxidant compound found in flaxseeds may help in the fight against malignant mesothelioma.

Approximately 2,500 new cases of the asbestos cancer are diagnosed in the US each year and tens of thousands more around the globe, yet there is still no cure.

What are Flaxseed Lignans?

Lignans are polyphenols found in plants, including flax, sunflower, sesame and pumpkin seeds.

According to research at Oregon State University, lignans are the principal source of dietary phytoestrogens, plant compounds that can mimic some of the effects of estrogen in the body, in the Western diet.

Flaxseed lignans are rich in a compound called secoisolariciresinol diglucoside, an antioxidant which has been shown to slow the growth of human breast cancer in mice.

To test whether flaxseed lignans could help prevent malignant mesothelioma, researchers at the Fox Chase Cancer Center and the University of Pennsylvania in Philadelphia used two groups of mice.

One group of 16-17 mice was fed a standard diet while the the second group was fed a diet supplemented with flaxseed lignan compound.

After one week, the mice were injected with asbestos fibers, the number one cause of mesothelioma worldwide.

One of the ways asbestos is thought to trigger mesothelioma is by causing chronic inflammation. But the Pennsylvania team found that mice who ate the flax-enriched diet experienced much less of the kind of inflammation that can lead to mesothelioma.

Because this kind of cellular “stress” can also influence the development of mesothelioma, the team concludes that flaxseed lignans “may prove to be a promising agent in the chemoprevention of malignant mesothelioma.”

Researchers in Iran tested the safety of a new version of the drug pemetrexed in patients with non-small cell lung cancer and malignant pleural mesothelioma. This drug is used to treat these patients when they are not able to get surgery for their cancer. The researchers were able to determine that pemetrexed is safe in patients with non-squamous non-small cell lung cancer. Treatment Choices Malignant pleural mesothelioma is a lung-related cancer like non-small cell lung cancer. It is caused by exposure to asbestos. Treatment for mesothelioma usually involves chemotherapy, radiation therapy, and surgery. Patients may receive more than one type of treatment. This is called multimodal therapy. Pemetrexed is a chemotherapy drug that interrupts the cell replication process that helps … END_OF_DOCUMENT_TOKEN_TO_BE_REPLACED